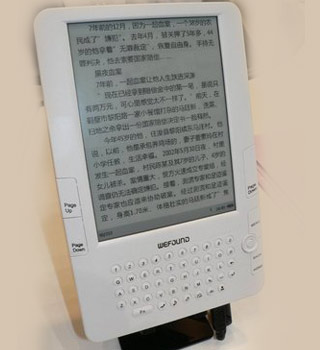 We all know about the popular Kindle digital book reader from Amazon. The Chinese have now come up with their own make of the e-book reader. This device possesses a very similar appearance to the Kindle 2 which released earlier this year.

This latest product is the brainchild of Founder International from Peking University Founder Group Corp in China. Although it bears a resemblance to the Kindle 2, there are still a few minor differences. According to Tech On, these include the width of the upper frame and the shape of the buttons on the left and right sides of the e-reader.

“Peking University Founder Group independently developed this terminal, and it has nothing to do with the Kindle,” commented Founder International.

The company said the display screen of their digital book reader comprises of E Ink Corp’s e-paper. Tech On however claims that the size of the screen is the same as the e-paper sported in the Kindle 2 which is 6 inches. Founder International also added that it will further develop the prototype and it may integrate contents for ‘Apabi’ which is an e-book viewer software made by Peking University Founder Group. It also disclosed that data can be downloaded to the device with a SIM card.

According the company, the digital book reader may release the improved product by the end of this year in China. It may hold a price tag of approximately $210.