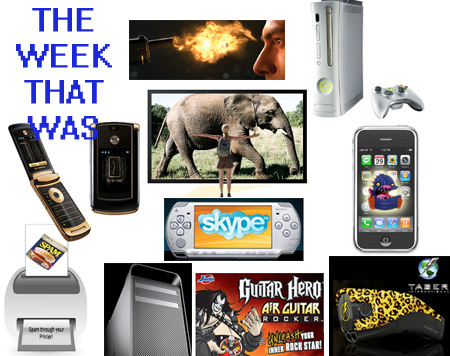 In our new column, we recap the best gadgets, funniest moments, dangerous viruses, rumors that made headlines, and everything important in the week that’s taken place in the tech field.

The New Year brings new things, new beginnings and the world of technology has certainly not been left out of it. The second week of the New Year 2008 has already come to an end, and looking back we can say it’s been quite an eventful week. This week saw a lot of new gadgets in particular considering the Consumer Electronics Show 2008 that been going on in Las Vegas.

At the CES 2008, Panasonic unveiled the world’s largest Plasma HDTV that measures a whopping 150-inches. Whoever says that size doesn’t matter!

Also unveiled at the CES was the Guitar Hero Air Guitar Rocker “toy”, which allows air guitarists to do what they do the best.

On the personal defense front, Taser, the world’s most well known company for such products, unveiled quite a revolutionary device known as the Taser C2, which marries protection with entertainment.

Apple’s iPhone was also in the news this week; not for anything good this time around. The touch screen device has been attacked by its very first Trojan Malware. Security firms F-Secure and Symantec confirmed this, so all you lucky iPhone owners better beware!

Apple also introduced the fastest Mac Pro ever, which runs on eight processor cores. Even better for media professionals to work on.

On the gaming front, Sony announced that the Internet telephony service Skype is now available for its PSP portable gaming device. So, besides doing the umpteen number of things that the PSP allows you to, here’s yet another!

A researcher also managed to successfully spam a computer remotely via a printer! Looks like nobody is safe nowadays.

A very disturbing event that took place in the gaming world this week involved a father shooting his son in the head over an Xbox 360-related argument. Click here to read the actual story, which we must warn you is very alarming.

Another shocking bit of news in the tech world and which will surely go down in history (for not a good reason that too) is for tech giant IBM who was just accused of dumping toxic waste in New York City that too! Talk about maintaining an image and environmental obligations.

To bring you out of shock, here is a great phone that Motorola unveiled this week. The MotoRazr2 V8 Luxury Edition mobile phone is meant for …well, the luxurious at heart! So eat your heart out on this one while the expenses eat your wallet out.