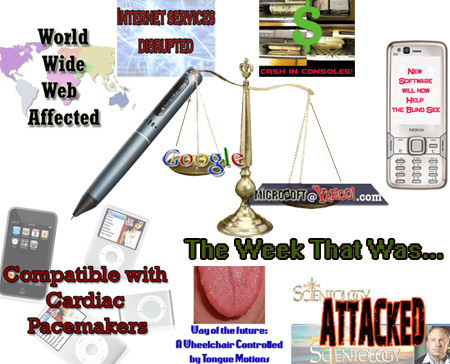 The week of January 28- February 2, 2008 has come and gone in a flash. From the Church of Scientology, to cash smuggled in gaming consoles, to amazing technological revolutions, this week has seen it all.

The very first day of the week saw us in a feisty mood because we came to know that the Church of Scientology’s web site had been attacked. The group of hackers called “Anonymous” decided the attack the web site to seek media attention in order to help save the unknowing people from Scientology by reversing the process of brainwashing. Click here to read the entire story.

New software for the blind has been developed by technology futurist Ray Kurzweil and the National Federation of the Blind. This text-to-speech software is being offered with the Nokia N82 handset and enabled the visually disabled, dyslexic and blind people to ‘read’.

Livescribe has come out with a very intelligent pen called the Pulse Smartpen, which is sure to revolutionize the process of taking down notes. While capturing the writer’s handwriting, it also records audio and synchronizes it to the writing, allowing those who are required to jot down matter without ever missing a word.

Since we are talking about all things revolutionary, soon a new technology will come into commercial use which will definitely prove to be a ray of light for the disabled and paralyzed. Scientists at the University of Bristol are developing a wheelchair that will be able to be controlled by severely disabled people by simply moving their tongue.

And, now there is good news for music lovers. In case you wear a cardiac pacemaker, you might have refrained from listening to your iPods because of the numerous studies that said they cause the pacemakers to malfunction. Well, now good news has arrived in the form of a study which contradicts the previous studies. Rock on, we say!

Sometimes we feel that the gaming world and things that happen in it are way too unbelievable! When a raid was conducted to investigate a man who was supposedly running illegal business of selling Sony PSP SD memory card and modding offenses, the investigators found a whole lot more. They found around £12,000 in hard cash stuffed into an Xbox console and some in PS2 consoles. The things that people do these days are just beyond our comprehension!

We are sure that everyone must have at some point of time imagined what it must be like to go for a day or even two days without the Internet. Well, here in India, we didn’t have to imagine, because it so happened that an undersea optic cable in the Mediterranean Sea had snapped, causing 60% of Internet services in parts of India, Egypt and the Middle East to be cut off. Apparently, a ship docked off the coast of Alexandria had cast its anchor exactly onto the fiber optic cable causing it to get damaged, and putting millions of people in an edgy place, one which did not allow for Internet surfing, the much-loved chatting or even for sending off important business emails. It was most certainly a terrifying day!

Finally, the week ended on a very surprising note with reports of a possible Microsoft-Yahoo marriage doing the rounds on the Internet. And, it could be true because Microsoft CEO Steve Ballmer himself spoke to analysts about this acquisition. Together Microsoft and Yahoo! Hope to build an empire even greater than Google, so that they can put the oh-so-colorful and innovative Google out of the picture.