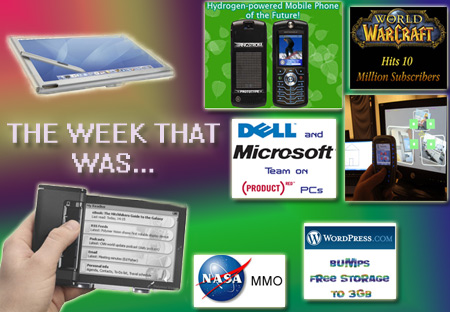 Well settled into the New Year 2008, the weeks just keep rolling by. The first week of the year saw some pretty amazing inventions leaking into the commercial world via CES 2008, while Week 2 of the New Year wasn’t all that bad either with a good number of rather strange news pouring in, giving us a chuckle or two about the funny incidents that happen in the tech and gaming world!

This week, January 21- 25, 2008 has thrown us a mixed bag of good news and good products to match. Read on for a recap of the week that was, as we fondly like to call it.

Azeroth has officially become a universe in itself! The MMORPG World of Warcraft has passed the milestone of garnering over 10 million paid subscribers. So popular is this fantasy PC game that it enjoyed the title of being not only the best-selling PC game, but also the fastest-selling one.

Polymer Vision showcased a really innovative mobile phone which blends in the functionalities of a phone and book-reader. Known as the Readius, this phone sports a fold-out screen for reading eBooks on-the-go, and to top it all the entire device is just about the size of two business cards.

All you Wordpress bloggers can now rejoice as you no longer have to curtail your words anymore. Wordpress is now giving 3 GB of storage space as against the mere 512MB that was previously offered. Moreover, the increased space does not mean that bandwidth limitations will exist; rather, files (high-res images, Office docs, PDFs, songs and videos) will be available for download no matter what the traffic is.

We have all heard of mobile phones such as those by Sony Ericsson being used as presentation pointers and even as remote controls. But now, here comes a software through which your camera phone can double as a PC mouse. All you need is a Bluetooth connection and after a few position adjustments, voila! your camera phone is ready to act like a mouse.

If you thought that there is no goodness left in this war-filled, disease-ridden, hunger-stricken world, then read on, because there’s still some hope left. Software giant Microsoft and PC-maker Dell have come together for a noble cause- (PRODUCT) RED. Together, the companies will offer crimson red PCs, the part sales of which will be donated to the Global Fund that supports health programs, mainly AIDS-related ones in Africa. In the past, the Irish rocker Bono and Apple team-up contributed heavily to this cause, and so did The Gap and Motorola.

Move over Macbook Air, because the ModBook is here! Axiotron’s Mac-based tablet PC was recently showcased and is bound to become a hit with media enthusiasts. Salient features include a Wacom pen-enabled display, a 13-3” widescreen display, iSight camera, built-in GPS and of course the good ol’ trustworthy Mac OS.

And once again, I believe that there is some good being done in the world. Motorola showcased its MOTO SLVR L7 handset at CES 2008; but wait, this is no ordinary phone. It actually runs on a hydrogen-powered fuel cell, as against the highly polluting lithium ion batteries. Further more, Angstrom Power’s methanol fuel cell requires just 10 minutes to recharge and can be integrated into most handsets of today. The only thing that remains to be seen is when exactly these ‘Green’ batteries come into commercial use.

Space agency NASA, known to cover up a lot of evidence of life on places other than earth from the public, is reportedly in the process of developing an MMO game that will incorporate challenging gameplay, fun as well as education all into one package. So, now you don’t really need to become an astronaut to learn the nuances of rocket science! Other wise I rocket science isn’t your thing, then maybe the green martian woman that was recently spotted in NASA’s video footage of Mars may intrigue you.