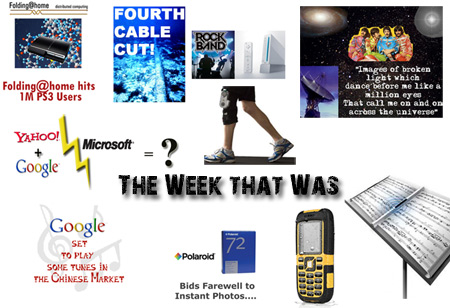 As 2008 progresses, our weeks have been blessed with amazing technologies, new inventions, strange news from the gaming world (which is as always funny to the core), and unexpected events. This week like always, we bring you the most hot and happening technology stories. And, there have been quite a few good ones, in spite of it being Carnival and Superbowl week!

February 4th was a very special day, as it happened to be the 40th anniversary of the day that the legendary Beatles first recorded the song “Across the Universe.” But, making the day more special was the fact that NASA blasted this very song towards the North Star Polaris and also requested people around the world to play the song from their houses at the same time! This certainly was an amazing initiative towards making this world a better place to live in. Yoko Ono, wife of the late Beatle John Lennon termed this the beginning of a new age only reinforcing our faith in all good things to come. And, reinforcing the fact that the Beatles spread the message of love was that they had visited the Maharishi Mahesh Yogi in India’s Himalayas in the ‘60s. The Transcendental Meditation guru passed away exactly two days after the song was broadcasted into deep space! The number of coincidences these days is just bringing the world closer to realizing that coincidences are meant to happen and are indeed signs to pay heed to.

Sony has passed the milestone of a million PlayStation 3 users participating in Stanford University’s [email protected] initiative within just one year of its launch. The project aims to utilize a multitude of PS3 consoles with a goal of findings cures to some of the world’s life-threatening diseases such as Huntington’s, Parkinson’s disease along with some forms of cancer.

And, since we are dwelling in the gaming world right now, owners of the Wii console will be pleased to know that the hugely popular Rock Band video game is heading to the shiny white console. Rock On!

One bit of news that affected parts of the world, mainly the IT sector was the three cable cuts that took place undersea in the Middle East. It was worthy of making it to our last week’s roundup. But, this week saw yet another one, making it the fourth optic cable cut in two weeks. Innumerable theories have been doing the rounds on the Internet. Some people think it herald the coming of the Antichrist, while others even believe that some agencies are cutting undersea cables to stop the illegal file sharers! Well, personally, it’s too much of a coincidence for me to believe that the breaking of the undersea cables happened naturally.

Last week, the Internet was bombarded with news of a possible takeover of Yahoo by Microsoft. Well, everyone wondered what the outcome of that marriage would be like! But, this week, if reports are to be believed it seems that poor Microsoft’s plan backfired as Yahoo could be considering an alliance with none other than its rival Google.

Google is always playing the role of a scheming mastermind in the tech world. This time around, the search giant will soon be entering into an alliance with an anonymous Chinese music company. Google aims to offer free licensed music downloads in the Chinese market and together with the music company will play rival to Baidu.com.

Soon, a knee brace may be able to power your cell phone and you will just have to take a walk in your local park to recharge the device. Well, scientists are currently working on a innovative device that will harness energy from the wearer itself. Sounds just perfect, as not only will you get exercise, but at the same time, you’ll also be able to juice up your phone’s battery. An added benefit would be the fact that you won’t be utilizing electricity to charge a cell phone. Go Green, we say!

I remember when I used to play piano during my younger years, it was almost close to impossible to flick the pages of my sheet music, and would require somebody to actually do that for me! Now, after all these years, Yanko Design has come out with the E-paper Music Score (EMS) which is a flexible screen that works on Bluetooth. So, all you have to do is feed your sheet music wirelessly from a computer. Here comes the best part, when you wish to turn the page, all you have to do is tap on the conveniently placed foot peddle! Now, you will be able to play your music in peace!

Sonim Technologies will be unveiling its ultra-strong and rugged mobile phone- the Sonim XP1 at the Mobile World Congress in Barcelona. The company claims the phone has withstood every possible test. Some of these extreme tests include the Sonim XP being kicked around; run over by a tough vehicle and placed in an oven and freezer!

Gone are the days when you will be able to buy an instant Polaroid film camera to click fun shots of you and your friends. Now, Polaroid has shut shop with regards to this business after six long decades! In spite of being in an age where cameras being digital allow one to click, view and edit all from a single device, we will dearly miss the good ol’ instant Polaroid cameras.