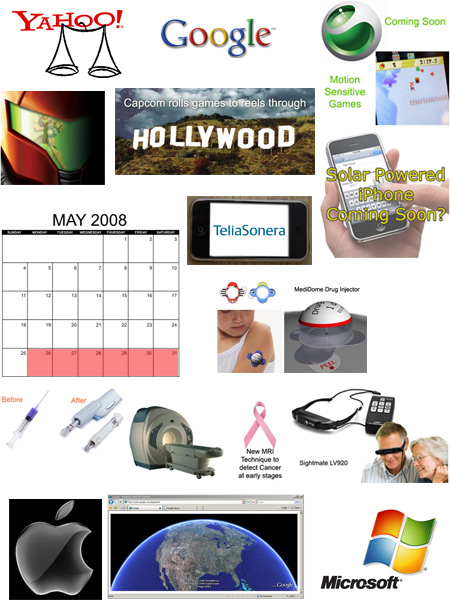 Ever wondered what life would be without innovations, technology and breakthrough sciences. Nothing, nothing at all! And now we are back, giving you a blast from the recent past, letting you know how life’s only going to get a whole lot better with the latest launches and discoveries. This and more lined up for you right below.

Let’s begin with all that happened in the world of the modern man’s most indispensable best friend – the mobile phone.

No week is complete without having something or the other about on the Apple iPhone. While the whole world is going eco-friendly, how could Apple be left behind? This week we saw rumors circulating around the net that state that the company is developing a solar powered iPhone. This could be all thanks to the innumerable battery life complaints received. Apparently, the solar panels will be placed behind the LCD touchscreen. Though we are yet wondering as to what happens post the sunset, for a fact the solar powered iPhone idea does seem to be a winner.

Well, though the solar powered iPhone does not seem to be seeing the light of the day soon enough, one thing that is fully confirmed and coming real soon is the device in the European territory. TeliaSonera has teamed up with Apple to bring the iPhone in the continent. If you live in Sweden, Norway, Denmark, Finland, Lithuania, Latvia or Estonia then you have a reason to smile as you would be getting the iPhone soon in your region via TeliaSonera’s network.

Sony Ericsson phones could soon boast of Motion-Sensitive games. Yes really! Reportedly, Sony Ericsson has tied-up with GestureTek for an exciting deal where they will employ a software engine that uses a mobile phone camera as a motion sensor. Expected to be incorporated to the entire range of Sony Ericsson’s camera phones, the company is going all guns blazing to add one more feather to its cap.

You’ve got to be either a gaming aficionado or a Hollywood buff, and if you aren’t either (which includes you in a truly unique species!) then scroll down as this news isn’t your poison for sure.

Capcom is teaming up with Hollywood film studios to produce games which will be on the lines of their spectacular game titles. At present Capcom and 20th Century Fox are working on a jointly funded and produced Street Fighter film. While Capcom is currently enjoying the success of the Resident Evil game and movie, it anticipates further glory in the future too.

American film director and producer Michael ‘Transformers’ Bay could soon be throwing his magical touch on a ‘Metroid’ film. Apparently, Bay is in discussions with Nintendo to make a Metroid movie. Only time will ascertain the rumors.

Stepping into the medical world, here’s a great piece of news for those who suffer from certain vision disabilities. Vuzix of Rochester, NY has developed a new gadget called Sightmate LV920, which will help giving a clear view to those who suffer from visual impairment. A hope for those who suffer from Macular Degeneration and Diabetic Retinopathy, the glasses use a 2MP camera with edge detection, contrast enhancement and optical zoom to improve the user’s eyesight. Along with several other key specs such as a twin high-resolution of 640×480 full color 24 bit LCD, the Sightmate LV920 is a dream come true for many.

No more cranky pangs from the pediatrician’s clinic, as the Biojector 2000 intradermal injector is here. It will be used as a needle-free flu vaccine delivery device for the young ones. It has a special technique of forcing liquid medication at high speed through a tiny orifice that is held against the skin. Currently being studied, if this device is actually introduced in the market, it could not only keep kids smiling but would also keep their mums gleaming, as though the shot may be administered to the child, it is invariably the mums who are most anxious seeing their little one crying.

The MediDome Drug Injector also adds itself to the needle-free section with its dome-like shape that will easily deliver the required drugs to you, eliminating the pain and the infections related to needle-pricks. The MediDome Drug Injector can be used only once and it will be of great help in times of mass immunization. The injector has been praised highly by the RSA (Royal Society for the Encouragements of Arts, Manufactures and Commerce) as well. So get prepared for a futuristic age of medicine which will eliminate the pain and deliver the right medication in simpler, safer and easier methods.

Cancer, the name of the disease itself is enough to send a shiver down someone’s spine. But there seems to be hope now as the latest MRI technique, devised by GE’s Healthcare, can detect cancer at the early stages and let the patient take necessary steps to heal it, before it’s too late. Magnetic resonance imaging judges the changes in pH or acidity in tissue, which is the main factor that detects the initial signs of cancer. The device will be able to judge whether the cancer drugs are effective or not. The sensitive scanning will detect cancer using the naturally-occurring chemical bicarbonate which is used for making baking soda. Currently it is in the testing phase.

Two of the biggest giants in the world of technology, Bill Gates and Steve Ballmer recently demoed a small clip of the Windows 7 at the Walt Mossberg’s D6 conference. Interestingly, Windows 7 will feature multitouch support where users get the ability to interact with their computer with the help of touchscreen technology. Alas, the version is expected not until 2010.

Apple has rolled out the Mac OS X 10.5.3 update, fixing vulnerabilities detected in the Mac OS. The good news is that Mac users can now sync their Mac Address Book contacts with Google Contacts. Also, the recently found iCal vulnerabilities have been dealt with. With several other enhancements, the latest update for Mac OS X 10.5, 10.5.1 and 10.5.2 users is available at the Mac Software Update control panel or as a download from Apple’s website.

Yahoo has dragged unknown spammers in the U.S. District Court in New York City under federal trademark law, federal anti-spam law and other state laws. The internet company has accused the spammers of breaching the federal Trademark Act and Can-Spam Act and related state laws. A false e-mail that deceives the recipient of winning a lottery, prize, or other award from the site is sent by the fraudsters. This e-mail then asks for vital information such as online passwords, credit-card information, and Social Security numbers from recipients. And needless to say, all this info is misused for other activities. Though no spammers have been recognized as of now, once they are, Yahoo seeks to put them behind the bars.

While one internet giant is busy suing, another is sadly being sued. Belgian newspaper copyright group CopiePresse, has filed a lawsuit against Google seeking US $77 million. According to CopiePresse, Google has breached its copyright, by reproducing and publishing content of the newspaper without any permission. While the regulatory group claims to have sent all the legal documents to Google headquarters in the US, the internet giant states to have received none.

Accessing Google Earth has become so much simpler now. No need to install it on the desktop anymore. The application has now been brought to the browser. Google Earth API and browser plug-in have rolled out as the newest members of Google Maps’ API family. Users have to simply install the plug-in that works with Firefox and Internet Explorer 6/7 on Windows. Interestingly Google Sky can also be accessed with the same plug-in.

That’s all that we could pack into this week’s Weekly Round-up of news. You exactly know where to come back, next week, to get your latest dose on tech, science and innovation.