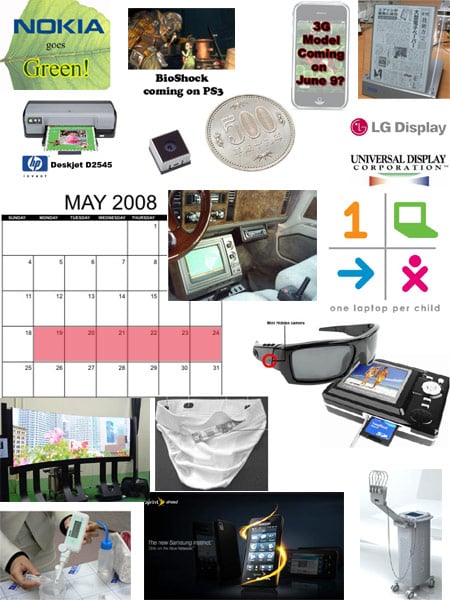 A lot happened this week. From product releases, to products getting dated for a near-future launch to companies getting eco-friendly, from displays going astronomical in size to them getting flexible too – it was a week of twists, turns and quite some tango. And if you’ve missed out on the best of the latest, then as always we get it especially for you under one roof, or perhaps on one page!

Let’s first touch on the forthcoming Shakira-like displays. Why Shakira-like!? Well they all claim to possess breathtaking flexibility and swivel, just the way the highest-selling Colombian artist of all time has.

First up is the 125-inch prototype display by Shinoda Plasma that can be used as either a curved or wrap-around screen. Apt for advertising, it features a resolution of 960×360, weighs an incredible 8 pounds, which is almost 10 times lesser than normal plasma displays. All other information regarding this display is under wraps.

As though we weren’t already awestruck with this humungous display, the new updated prototype of a flexible AMOLED (Active Matrix Organic Light-Emitting Diode) display by LG Display and Universal Display swore to steal our hearts away. Unveiled at the 2008 SID Conference, this innovative four-inch diagonal, QVGA full-color AMOLED display prototype, has been developed by using the companies’ state-of-the-art technologies. It incorporates LGD’s high-efficiency Universal PHOLED and transparent compound-cathode TOLED technologies. Improvements have been made in the area of color reproduction since the prototype that was demonstrated at SID 2007. Don’t expect it to reach you soon of course!

Respects to all the companies that are keen on going green, thus maintaining an ecological balance.

Finnish mobile phone giant Nokia has announced that anytime soon, it will launch as many as 40 new mobile phones that include biodegradable components which can be easily recycled. In addition, Nokia also plans to reduce the power consumption of mobile phone chargers by 50% by 2010. Furthermore, the company will insert a pre-addressed prepaid postage bag within each box when a phone is sold, which will allow users to return their older handsets for recycling purposes, at no extra price burden.

After talking about going green, preserving nature and maintaining its’ health to the core, let’s throw some light on the latest happenings in the world of science and health care.

Toenail fungus or toenail onychomycosis, as it is scientifically referred to as, is something that you wouldn’t throw your eyes on. But there may just be a solution for it. Nomir Medical Technologies of Waltham, Mass. is in the works of advancing on a study of the foot saving Noveon direct optical energy device. The study of this device will include evaluating clinical development and mycological decontamination of the treated area of the nail. A minimum of two-thirds of the 30 evaluable subjects will be treated with Noveon and the rest will serve as controls. The patients will be subjected to four treatments over a four-month period and will be followed up to a year following the initial treatment in order to examine and check on the clinical improvements and any mycological response. Post the FDA approval, the device will soon start curing the issues of many patients suffering with the fungus.

Ladies and “gentlemen” here’s presenting to you the Blood-pressure-sensing underpant. Developed by Philips, this modest piece of inner wear could soon be blessed with the ability to detect blood pressure. This technology checks the pulse wave and is sewn closely into the waistband of the underpants. Though it’s yet not clear as to how the readings will be display, one can surely look forward to such a helpful device…we mean “underpants”!

Apart from blood pressure, the urine sugar levels should also be constantly checked. The all-new Tanita UG-201 urine glucose monitor does exactly that. And you don’t need to hold any medical degrees to use it. The patient needs to simply urinate on the detection system. The device has an easy measurement system and ability to deliver accurate results. Incorporating a biosensor based on the enzyme electrode method, the device has been carefully designed in a way that it avoids any sort of spill out of the urine samples and makes an exact judgment. In merely 6 seconds this intelligent piece of technology checks the urine glucose level. Running on a single CR2032 lithium watch battery, the Tanita UG-201 gives around 180 days of battery life with the assumption that measurement is conducted thrice a day. It will be arriving in the Japanese market soon.

Intel is getting all geared on controlling the car using a Linux car-computing system that will be installed onto the car and will provide a futuristic drive for those who love to hit the road. It claims to control major functions such as navigation and multimedia functions, of the car. Powered by Atom processors and Moblin Operating systems, the new system will first be graced on the ‘79 “Atari Package” Buick Riviera car. Hope it drives out of its concept stage soon.

Monday, 9 June, 2008, could be the day the whole world would be waiting for with bated breath as the 3G version iPhone could see the light of the day on that day. The latest speculations say that Steve Jobs is going to introduce it on June 9 during the keynote presentation at Apple’s WWDC conference. What can we say, there are over two weeks yet left for 9 June, and for sure by then there would be a plethora of other rumors and speculations surrounding the 3G iPhone and its launch plans.

Remember the XO laptop, the device that has been developed by non-profit organization One Laptop Per Child, to facilitate children from the developing nations? Now a second generation XO laptop is on its way. X0-2 claims to enhance the new learning concepts and will also be affordable for bulk purchasing for the poorer countries. While the first generation requires just one-tenth of the power compared to a standard laptop, the power consumption by XO-2 is said to be even lower than 1 watt. This is especially important for children in rural areas where electricity is one of the biggest crucial problems. Half the size of the XO laptop, the XO-2 is planned for delivery in 2010.

Good news for BioShock lovers, as a PS3 version of the game is coming soon, confirmed EGM (Electronic Gaming Monthly). Apparently the forthcoming PS3 BioShock will include some graphical enhancements. It is dated for a Fall 2008 release.

June 20, 2008, could see long queues outside Samsung stores as the much-awaited Samsung Instinct touchscreen phone will be released on that day. Available exclusively via Sprint, Instinct is Samsung’s reply to all the other companies that are going the “touchscreen” way recently. It bundles several other exciting features such as a 3.1-inch TFT LCD 240×432 touchscreen, 2MP camera with recording and video streaming capability, Bluetooth 2.0, a full HTML Web browser, a digital music player that shows album art, support for Sprint Radio and Sprint TV, phone as modem capability, Microsoft Live Search, and integrated GPS with Sprint navigation. Instinct is Sprint’s first EV-DO Rev A consumer-centric device.

Sharp has developed the world’s thinnest auto-focus 5-megapixel CMOS camera module RJ63SC100 for mobile phones. The S/N ratio is advanced by 1.6 times, enabling devices equipped with the module to capture high-resolution sharp and clear images. The CMOS module’s sample shipment will begin from May 30 and the production will start from June 30, 2008

Seiko Epson unveiled the latest 13.4-inch (A4-size) electronic paper, which has a pixel count of 3104×4128 and its definition is an enormous 385ppi. Developed by combining electrophoretic electronic ink of E Ink Corp and a low-temperature polycrystal Si-TFT of Seiko Epson, the TFT was created on a glass substrate and its contrast ratio is 10:1 and reflectance is 40%. Commercialization of this revolutionary paper doesn’t seem to be anytime soon.

Researchers from the Laboratory of Intelligent Systems at EPFL have developed a robot which can actually jump like a Grasshopper. The robot weighs just 7 grams and can jump more than 27 times its body size. The elastic storage mechanisms are the secret behind robot’s jumps. The robot works on battery that lets the grasshopper robot jump for up to 320 at intervals of 3 seconds.

Spying on someone gets a lot better and you can involve your partner in crime to watch you over using a wireless receiver now. The Spy Sunglasses camouflage the camera intelligently on to the arm of the glasses and will not give a hint to the other person that you are recording them secretly. To help the gadget support the green project, the device features a Solar Charger with Cables. James Bond would be quite jealous that the common man will get hands over this ultra-cool gadget.

Just the way the sun sets, and bids adieu to the day, we too bid adieu to this week, but with a promise of welcoming the forthcoming one with lots more fervor. We shall be back next week with all the interesting bytes in the world of technology, science and health. So don’t miss it for anything!