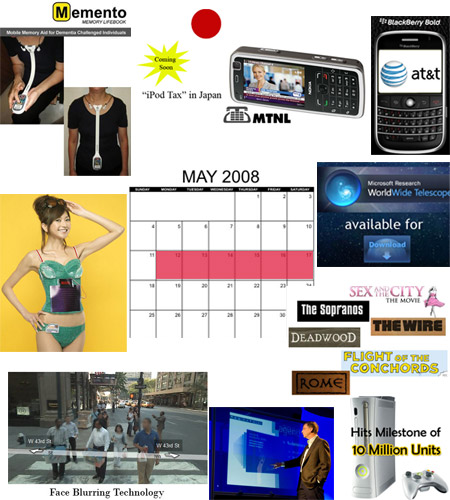 Chinese Taoist Philosopher Lao Tzu once said, “The Journey of a Thousand Miles Begins With One Step.” However the modern day tech-savvy world’s interpretation of this, as aptly noted by an anonymous author, could perhaps be “A journey of a thousand sites begins with a single click.” Quite a thought isn’t it! And here’s taking you through a journey of what controversies, innovations and ideas rolled out in the world of science and technology this week.

Let’s begin with some health-centric news that made it to the top this week. The most difficult truth for an individual is to lose track of his life and his memory. Dementia and Alzheimer’s disease are soon spreading across the world. But there maybe a ray of hope to combat them. A new device dubbed the MEMENTO Memory LifeBook claims to act as a competent personal assistant and will support the patients with communication, memorizing the main tasks for the day and a to-do list that allows the patients to carry on with their regular schedule. The mobile device can be worn around the neck and offers personal information along with a photo function for the patient to recognize and link the photograph with the person. It also includes a reminder function that reminds the patients about their medication schedule, a smart built-in GPS system to guide through the routes, and much more. Still in its concept stage, this device promises to be a true blessing to those whose memories are fading away with the passage of time.

Talking about memory, let us test yours’. Do you remember, last week we had reported about the Microsoft Worldwide Telescope? The good news is that the beta version of the tool has gone public. The Worldwide Telescope includes terabytes of high-resolution images of the space and displays them in a way that relates to their actual position in the sky. A great guide to all those little bright eyes that are keen on exploring the universe, as the tool will allow them to pan and zoom around the sky delivering rich images. You may be a student, an astronaut or perhaps just a lay person like me, discovering the universe is always quite an experience, and Microsoft’s Worldwide Telescope makes it quite a cake walk now.

When one thinks about the universe, we ought to think of our very dear Mother Earth, and ways that we can make it a better place, by going green, by harnessing solar energy and in short being eco-friendly. And guess what’s going solar now? A Bra! Yes you read it right – a Bra! Japanese lingerie manufacturer Triumph has developed the Solar Brasserie, which has the capacity to produce enough power to charge a cell phone or an iPod. It incorporates a solar panel which generates electricity and is in turned wired to a mini electric bulletin board for displaying messages. What’s more, water or vodka can be stored in the Solar Brasserie’s padding, and to sip the drink, simply insert a straw into the brasserie cup. The organic clothed bra includes a solar panel that can be worn around the stomach. Alas, the best things in the world of technology remain in their “concept” stage, and the Solar Brasserie isn’t any different. Wonder what the men need to wear to get eco-friendly!?

Amidst all the good news and innovations, the bad news is that if you are living in Japan, you could in the near future have to pay a tax for all media players and recorders that include a hard disk for storing media. Japan’s Cultural Affairs Agency has proposed that the government should charge a tax fee for all such gadgets. The move has been taken to essentially compensate right holders, which include recording companies, songwriters and artists, who suffer due to the rampant digital media piracy. As of now you can breathe a sigh of relief as the tax will not be executed until 2010.

Good news! Good news! All HBO shows are now available for purchase and download on the iTunes Store. Watch “The Sopranos,” “The Wire,” “Deadwood” and more on your Mac or PC, iPod nano with video, iPod classic, iPod touch, fifth generation iPod, iPhone or on a widescreen TV with Apple TV. “The Wire” and “Flight of the Conchords” are available on iTunes for $1.99 per episode, while “The Sopranos,” “Deadwood” and “Rome” are priced at $2.99 per episode. This also marks as the first time when Apple is selling any television programs for over its fixed price of $1.99.

RIM’s gone bold and revealed that the BlackBerry Bold will be available exclusively on AT&T’s network. The good news is that apart from the US, RIM’s first-ever 3G capable phone can be used in countries like Japan and South Korea too. No more details, such as the pricing and availability of the Bold, have surfaced as yet.

Contrary to what most of us believed that the Wii was the outright winner of the next-gen console war, Microsoft revealed that its Xbox 360 gaming console is the first console to reach the 10 million units sold milestone in the US. Of course, a decent portion of the sales has been attributed to the release of the GTA IV game that boosted the sales of the Xbox Live to a greater extent. The worldwide membership of Xbox LIVE hit the 12 million mark this month.

Internet giant Google cares for its users, and it shows. Google’s Street View feature now freshens up the Manhattan area. The new updated imagery will include other innovative features, making them sharper and clearer than before. But what can be regarded as the best addition to the Street View feature would be the introduction of the face-blurring technology in the latest Street View images, where the faces of the people captured in the images are blurred. This surely makes a lot of sense as it secures the privacy of the people walking the streets. However, the newly introduced technology is still in its testing stage.

A great piece of news for India-based mobile phone users could be on its way as telecom operator Mahanagar Telephone Nigam (MTNL) plans to make available the Mobile TV application on their phones, by June this year. After a successful completion of field tests, the application will be ready to grace handsets. MTNL of course has the distinction of pioneering his service in the Indian subcontinent.

The human touch was always the most healing one for sure. But never before has technology used it to such a wide extent. From touchscreen phones to touchscreen interface coffee tables, it’s the magic of the touch that is being explored to its maximum. And now Microsoft honcho Bill Gates unveils one more – the TouchWall, which is essentially a Vertical and Wall-mountable Version of the Surface. Featuring the Plex software, the 4×6 feet huge TouchWall’s laser and infrared technology with the Plex technology, help in producing the touch input. Apt for board meetings or other places where interactive presentations are given regularly, the TouchWall adds to the list of much-awaited list of “concept” products.

That’s about it for this week. Here’s leaving you with a promise of being back next week with more. But before we move out, here’s quite a food for thought. The great Albert Einstein once said, “It has become appallingly obvious that our technology has exceeded our humanity.” Really!?