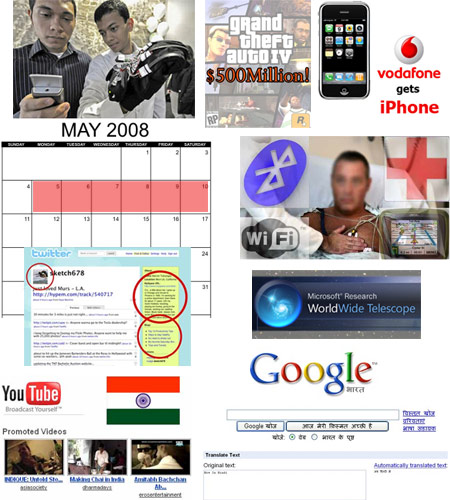 Would you imagine that a glove could actually speak? Would you believe us if we told you that the modern-day Wi-Fi technology will now be used to alert about heart attacks? Guess you wouldn’t! Well then you need to read on to know all that happened this week in the world of technology and science that promises to take the world by storm.

Here’s throwing some light on the innovative gloves that can actually speak. Boffins at the Carnegie Mellon University have devised a glove dubbed Handtalk that has the ability to convert hand movements into text, enabling the deaf to express themselves better. The deaf or mute person needs to put on the gloves onto his/her hand and on the basis of the variation of the movement, the device will convert it intelligently into text and display it on a mobile phone for the other person to comprehend it easily. When the device is first held in the fist it greets ‘Good Morning’ and when one extends the index finger, second finger and thumb, the device responds ‘I’m having a good time’ and hold out the index finger, little finger and thumb, The Handtalk glove will courteously respond as ‘Thank you for your time’. That’s how simple things get now! At present the device is growing through its set of enhancements and developments, and on the basis of user feedbacks, it will be advanced further. Hope this technology sees the light of the day soon!

Doctors and emergency help sections can now breathe a sign of relief, as OfCom’s new device has been conceptualized. It will include sensors implanted into patients who have a high risk of heart attacks and would send an alert of emergency that will help to quickly respond to the patient. Currently in its absolute nascent stage, if this device passes through all the safety and security checks, then it’s sure to be quite a winner!

Coming to the world of the internet and social networking, the good news is that MySpace users can now make their information available on other websites too. Dubbed “Data Availability” , with the latest service users can share their public profile information with Yahoo, Twitter, eBay and Photobucket. Of course, users can maintain a control over the information they share and who they share it with. Interestingly, users can update their profile in one place and share that information with the other sites that they frequently update. So now you needn’t open several different windows, as one would do the work of many.

Talking about the online world, users in India need to glee, as a YouTube India the local version of the very popular video sharing site has been rolled out. Packed with regional and localized content with a search homepage that revolves around videos and links related to India, users in India get ready for a whole new video experience! The other functions and features remain similar to the international version.

Internet users in India can now get closer to their soil as Google has launched the Google Translator in Hindi language. The translator feature will allow users to convert the desired text or web page into Hindi. Additionally, users can translate text to Hindi and post the same as a scrap to their friends on Orkut.

In short, the YouTube localized version and Google Translator give net savvies in India further reasons to be surfing 24×7.

Did you purchase your copy of Grand Theft Auto IV (GTA IV)? If yes, then Take-Two surely needs to thank you as you are one amongst the millions of people who has helped the game reach a milestone. Over 6 million copies of the game have been sold across the globe. Wow! With this achievement, the action adventure title has created an all-time record for any video game, movie or album.

Coming to the mobile phone space, the good news is that the iPhone would be reaching ten new countries via Vodafone’s network, by 2008-end. Now if you are thinking that this too is one of the speculations that Apple is well-known to be surrounded by, then well, you’re wrong. In an official statement, the two companies have confirmed their coming together. Australia, the Czech Republic, Egypt, Greece, Italy, India, Portugal, New Zealand, South Africa and Turkey are the countries where the iPhone will grace its presence via Vodafone soon.

What a way to pay tribute to someone’s contribution! May-end will see the announcement of Microsoft’s WorldWide Telescope project, which is a free tool that allows users to explore images of the sky at night. Reportedly, the initiative, akin to Google’s Sky service, is being dedicated to researcher Jim Gray, who went missing at sea last year. A major part of the technology employed in WorldWide Telescope is developed on Gray’s original SkyServer project. The WorldWide Telescope is created with the software giant’s high-performance Visual Experience Engine that allows seamless panning and zooming across the night sky. Additionally, the online service will include terabytes of images, data and stories assembled via several sources.

That’s all that we could pack into this week’s updates. Keep surfing and stay tuned to our site to know the latest and the best in the tech world.