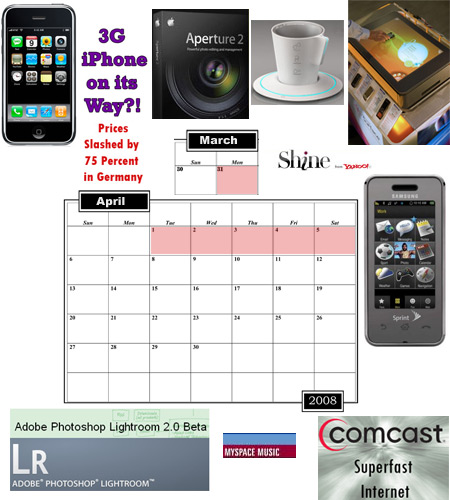 Music, mobile phones and mind blowing technologies, this is what aptly defines the week that passed. While new innovative technologies emerged in the mobile phone arena, a slew of breathtaking concepts were unveiled that may just make tomorrow a whole lot simpler. But as of now, let’s not float into the morrow and let’s get on with our weekly roundup.

Let’s first go through what happened in the mobile phone arena.

If you are about to buy the iPhone, you may perhaps want to just wait till June, as Samsung’s Instinct, a fully touchscreen handset is set to make its official debut via Sprint. Every single feature of this device can be accessed through a simple human touch. The phone includes localized tactile feedback, called haptics, allowing the virtual QWERTY keypad and other operations to become a sensory experience. No doubts as to why it is said, that the human touch can cause wonders!

All the same, Apple always makes it a point to come out with something more exciting than ever before. As though its iPhone wasn’t enough to blow the world away through its breathtaking touchscreen technology, it’s now all set to release the 3G version of the iPod-cum-mobile phone device in the second quarter of 2008. However, if you’re residing in Germany and 3G isn’t exactly the thing you want, then grab the 8GB iPhone for only 99 euros right now. Yes, you read it right indeed – 99 euros!

Coming back to the world of touch-screen, one thing that left all jaws dropped was the touch-screen coffee table computing device by Microsoft called Surface. Now the latest buzz is that this uber hot looking product will be debuting first on AT&T stores on April 17. A total of 22 Surface are programmed to recognize 8 of AT&T’s wireless devices. Simply place your phone/s on the table and voila there pops up all the data about its features. Furthermore, shoppers can also zoom around AT&T’s coverage map and learn about the calling plans by moving their hands across the screen.

The world may celebrate International Women’s Day on 8th March every year, but Yahoo! decided to salute the power of women a little later with its exclusive women’s website called Shine. Shine will include articles from few women’s magazines and female bloggers. Such sources of the articles will include Glamour, Epicurious.com, Style.com, InStyle, Cosmopolitan, Harper’s Bazaar, Women’s Health, and Good Housekeeping. Well, what can we say, better late than never!

Talking about excitement, one cannot surely miss out MySpace Music, a new online music store which will sell digital music as well as concert tickets and merchandise. A true haven for every music aficionado, MySpace Music will allow users to share and purchase music and merchandise at one place for their digital music player. The personalized music management product offers users the ability to control their entire MySpace Music experience directly from their user page by creating playlists. It also gives an access to enhanced purchase opportunities and search functionality. Be here or prepared to miss out a lot!

All you photographer’s – Smile – we are ready to capture it! Well, if you’re wondering what the occasion is, then here you go. Apple has introduced Aperture 2.1, which brings in an open plug-in architecture making things easier for photographers to use specialized third party imaging software right from within Aperture. Available as a free software update to all existing Aperture 2.0 users, Aperture 2.1 incorporates Dodge & Burn, the Apple-built plug-in that adds brush-based tools for dodge (lighten), burn (darken), contrast, saturation, sharpen and blur.

And glee a little more as Adobe launched the Photoshop Lightroom 2.0 beta, which is a general preview of the latest and more enhanced functionality to be delivered in the next major launch. The latest Lightroom 2.0 beta version will include enhancements such as dual-monitor support, localized dodge and burn correction and will be the first Adobe application to support 64-bit for Mac OS X 10.5 Intel Macs and Microsoft Vista 64-bit operating systems.

A new definition of speed could be Comcast’s 50 Mbps data speeds service. Just put a movie for download, go prepare your coffee and on return the movie download is complete, as 10 minutes is all it takes to download a high-def movie. But as they say, the best things in life aren’t cheap, Comcast’s 50 Mbps downloads and 5 Mbps uploads come at $149.99 per month.

US politician Mark Kennedy once said, “All of the biggest technological inventions created by man – the airplane, the automobile, the computer – says little about his intelligence, but speaks volumes about his laziness.” What can we say, The Cup may second his stance. The concept of “The Cup” essentially seeks inspiration from the common behavior of humans in every situation and place. Believe it or not, in the future, people wouldn’t have to learn the PC as the computer system will have an effect on the behaviors of user’s everyday conduct, like using a cup. “The Cup” is essentially a smart PC design with respect to following form and functions of physical and innate interface of cup. This new PC follows typical behaviors when people use cups, which includes containing, collecting, piling and pouring water into other cups. Similarly the PC has functions of storing, sharing and organizing information.

This brings us to an end of quite a techciting week.