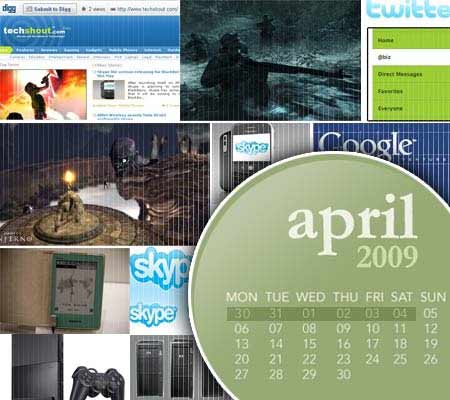 It has been a busy week, and as we expected last Saturday, these seven days did bring in a lot of exciting stuff, like new week. PS2 prices dropped, Google launched its new venture, a new animated movie based on Dante’s poem has been announced, all this and a lot more happened from March 30 to April 4, 2009. Want more? Here is a quick recap of all the amazing stuff waiting for you, read on:

Amazon’s Kindle 2 was quite a lot in the news when launched. To take some attention away from the e-book reader, Samsung has launched its own, the Papyrus. Samsung Papyrus, supposedly a touch-screen device will launch this summer and will also accompany features like memo pad, scheduler, calendar, world clock, calculator and support for contact list. Its size is said to be 5.8 inches x 8.3 inches. There is yet no official statement on the e-book reader; yet, reports have it that it be available for under $300.

On March 31, we came across a report that says playing shooter video games improves vision. Boys get one more reason to carry on the virtual violence! Researchers from University of Rochester in New York, Goldschleger Eye Research Institute and Tel Aviv University who conducted the study have found that people who played shooter games reported of improvement in the “Contrast Sensitivity Function (CSF)” of their eyes by 43 to 58 percent. Improved CSF is believed to help in conditions like driving at night, low visibility on roads, etc. by improving the ability of the eyes to differentiate between various shades of grey. The research has been published in the Nature Neuroscience journal.

Twitter made a few changes to its micro-blogging platform, this week. What were known as Twitter ‘Replies’ will be now known as ‘Mentions’. Also, users will now see their own @username tab which will display a list of all the tweets from the user’s account on basis of the @username. With this the updating functionality of Twitter has also been improvised upon.The updated feature selects @username of the user from anywhere so the users know who is tweeting about them. The update will be available in APIs for developers as well. Meaning, you know when and where your @username has been mentioned.

On the other side, Sony announced a major change in the pricing of the PS2. The console’s pricing has been brought to a $99.99 price point. A shocker for PS3 fanboys, the news came unexpectedly when the world of gamers was waiting for a drop in PS3 prices which was predicted by analysts recently.

Also, Skype introduced an app of its VoIP for iPhone and BlackBerry. The app runs via Wi-Fi for iPhone. The lite version of the app will be coming for BlackBerry handsets in May which will run on local airtime and needs calling plan and data plan in place instead of Wi-Fi. The Skype-Skype to calls on iPhone will be free while that on BlackBerry will be charged as per the plans by the network carriers. Rest of the features, common to both the app for both devices, include – low cost Skype calls to landline and mobiles, usability of Skype online number to receive calls and access to the Skype contacts which are online and available for chat.

HP introduced three of its all new workstations from the Z series. The HP Z800, HP Z600 and HP Z400 starting from the prices of $1,999, $1,679, and $969, respectively, boast of being Intel Xeon processor (Nehalem) powered. The workstations are aimed for industries like graphic arts, broadcast, computer-aided design (CAD), engineering, medical imaging, finance, and oil and gas exploration and are capable of managing heavy work load owing to features like Intel Turbo Boost technology, Intel Quick Path technology and more and also come with the option of solid state drives. These HP Z workstations will be available around the world from April 6, 2009 onwards.

Now here is something for Digg lovers. Digg finally unleashed its toolbar which is aimed to make digging and sharing easier. Users will be able see the toolbar on any page that Digg has a link to. The other features of the toolbar include sharing options for Twitter and Facebook, and shortened URLs. The Digg toolbar also lets users see a few comments, displays other stories from the same source and it incorporates a Random Button which take the users to a random page with the same story. The toolbar is live and ready for you to start digging.

And here is something for those literary lovers who have read Dante Alighier’s Divine Comedy. EA and Starz Media announced the commencement of their project to turn the game based on the Dante’s Inferno poem into an animated movie. It will be produced by Joe Goyette who also produced the Dead Space: Downfall. The movie will be directed by Victor Cook and is being written by Brandon Auman. The game based on Dante’s Inferno will be releasing in 2010 for Xbox 360 and PS3 and is being developed by EA.

Google too announced its new venture capital fund – the Google Ventures. It will encourage new technology companies like consumer Internet, clean-tech, bio-tech, health care, software and others and help them develop and grow into the next big things. Google will do this by and for, not acquiring these companies, but by “looking for investments with the potential for significant financial return,” says the company. Google Ventures will be taken care of by Rich Miner and Bill Maris who are heading it.

There have been other important events taking place around the globe, apart from these; do catch up with them, yes on the right, there they are. And for all new happenings, keep watching the space when we return on Monday with new budding inventions like new blossoms of spring. Till then, wish you a pleasant weekend.