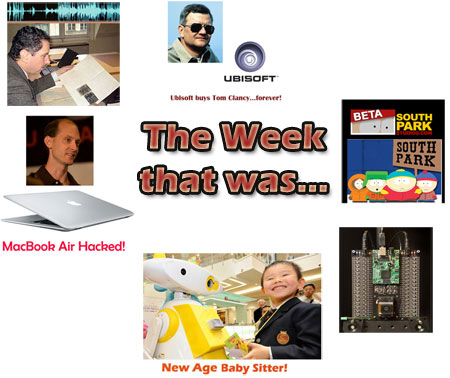 Lots and lots of interesting happenings in our world, and by that we mean in the technology and gaming arena, but of course! So much so that it was more than we could handle, so we had to pick out the most important news of the lot. So read on for a recap of the week.

Stanford researchers are working on a camera that will be able to create a super 3D effect. Usually, we get just a 2D image without our current cameras, which seem plain old boring now after we heard about this super camera! And, the most interesting thing is that the 3D camera is expected to cost less than high-tech cameras available today.

After ten long and hugely successful years of games revolving around the Tom Clancy Universe, Ubisoft finally thinks its time to permanently own the intellectual property rights to use the author’s name on a royalty-free basis. Yes, all you lovers of the stealth mode, can now look forward to tons of new video games, movies, books and other merchandise connected with none other than the master of stealth Tom Clancy himself.

Some more good news! Adobe’s most widely used and highly ubiquitous imaging software Photoshop is now available to anyone and everyone for free on the Internet. Adobe Photoshop Express is yet in public beta, but it offers all the basic features that one would need to touch up, lend effects and do a lot more with their photographs.

All episodes of everybody’s favorite highly controversial cartoon South Park is now available on the South Park Studios web site for all to see. Thanks to Trey and Matt, the creators of this show!

Scientists have converted the earliest sound recording, which was only available etched on paper into an actual audio clip! It translated into the voice of a soprano woman singing a French song and was played for audiophiles to hear and rejoice at this magical marvel.

The MacBook Air has been hacked at a security conference by a man called Charles Miller. Not only did he hack into the laptop but he won himself a whopping $10,000 in hard cash!

And, now parents can finally go back to having fun without their kids because a new age baby sitter will do the work for them. The Robot Baby Sitter will entertain your children, talk to them and even be able to identify them by name! We wonder what will happen in the near future in Japan?