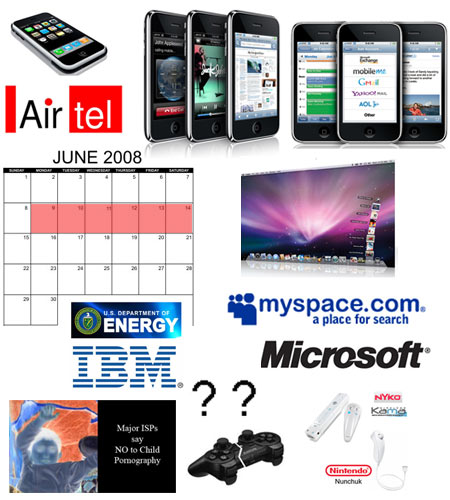 This week saw quite a few ups and downs in the ever enticing world of technology. But somewhere the week belonged to a great extent to the Cupertino-based giant Apple. To know how, why and what made it the news breaker of the week, read on:

As anticipated, Apple rolled out the next generation of the iPhone on June 9th. Unveiling the new iPhone, which is simply called the “iPhone 3G” at the WWDC, Steve Jobs put smiles on several faces across the world by announcing that the device will be rolled out in 70 nations. The latest version of the iPhone includes 3G connectivity that promises twice as fast networking as the first generation iPhone. In addition to 3G connectivity, the new iPhone incorporates several important features such as the built-in GPS for expanded location based mobile services, iPhone 2.0 software supporting the Microsoft Exchange ActiveSync and runs hundreds of third party applications already built with the recently released iPhone SDK. Hitting stores across 22 countries on July 11th, the iPhone 3G’s 8 GB model will carry the price tag of $199 while the 16 GB is priced at $299.

While there is less than a month for the first lucky 22 countries to put their hands on the iPhone 3G, UK wireless carrier announced yet another good news, which has a catch of course! O2 has revealed that it will offer the new iPhone at no extra charge with some plans. O2 users who go in for the service plans costing either $88 or $146.50 a month would walk away with the 8 GB version of the iPhone 3G at no extra charges. To avail of the 16 GB version of the iPhone at no charge users would have to go in for a more expensive subscription plan. Great news for businesses too as O2 is in the works of offering the iPhone 3G smartphone at no charge for companies on a 24- or 36-month contract.

While India is being looked upon as a potential market for most businesses and ventures, Apple could not leave behind the land of the Taj from being mesmerized with its new iPhone 3G. As expected, India appears in the list of the 70 countries where the device will be rolled out. While this is the good news, the not-so-good news is that India will not be amongst the first 22 nations getting the device. No idea on when would it precisely be available in India. But what’s known is that Apple has teamed up with Bharti Airtel to bring the 3G handset to the Indian users. But, with this news there are several other questions that spring up. The biggest one being that India does not have 3G connectivity, so how would the 3G iPhone work in the country. There could be a possibility that Bharti Airtel could introduce the 3G features, if not then for all purposes the iPhone 3G would serve to be just like the previous generation iPhone. Any takers?

And news from Apple’s kitty doesn’t end there. Apart from iPhone 3G, Apple also previewed the Mac OS X Snow Leopard operating system that is based on the OS X Leopard and is the next major version of the same OS. Thanks to a new technology code-named “Grand Central”, Snow Leopard offers support for multi-core processors. Thus, creating programs that take full advantage of the power of multi-core Macs is made simpler for developers. And not to forget, the new operating system supports Microsoft Exchange 2007 in OS X applications Mail, iCal and Address Book, making it easier to incorporate Macs into organizations of any size. Expected to ship in about a year’s time, the Snow Leopard OS includes several other interesting features too.

The Roadrunner Supercomputer is being developed by the U.S. Department of Energy and IBM. This wonder has the ability to perform over 1 petaflop (1,000 trillion) floating point operations per second. It is primarily developed to carry out calculations that would advance the ability to certify if the U.S. nuclear weapons stockpile is reliable without conducting underground nuclear tests. The energy-efficient Supercomputer delivers world-leading efficiency – 376 million calculations per watt. IBM anticipates the Roadrunner to be included in the official “Green 500” list of supercomputers. If you aren’t impressed by this bit, then here’s something that would blow your senses away. According to IBM, if each of the 6 billion people on this planet had a hand calculator and worked together on a calculation 24 hours per day, 365 days a year, it would take 46 years to do what Roadrunner would do in one day. Wow!

Venezuela joins Brazil, India, South Africa in the appeal against software giant Microsoft’s Open Office XML document (OOXML) format as an ISO/IEC International Standard. Thanks to this opposition, ISO has finally decided to put the standardization decision on hold. The four countries disputed stating that the voting procedure was not satisfactory. Furthermore, these countries also mentioned that adequate time wasn’t offered for discussing improvements in the format. In addition, OOXML was also blamed of not being fully compatible with other document formats, claim opposing countries. As of now, the Open Office XML format is being kept on hold until the investigation, on the matter finishes.

Another company that is facing rough waters is Nyko. Nintendo has filed a lawsuit against Nyko over violation of its two patents. According to Nintendo, by launching the wireless Kama Nunchukm Nyko has violated Nintendo’s patents regarding designs and trademarks on the ‘Nunchuk’ name. Though much details of the lawsuit aren’t available, it was realized that Nintendo is asking for cash compensation. Nintendo’s Nunchuk is a wired peripheral, which is used with the Wii remote.

While tech companies are going the green way, some others are doing their bit of good by supporting the right and being moral. While the internet is a haven for information and communication, some individuals prefer using it for malicious activities and indulge in spiteful behaviors like child pornography. But there may now be a hope in curbing this. Leading ISPs Verizon, Time Warner Cable and Sprint have teamed up with Cuomo to block access to child pornography. The three leaders have agreed to pay a total of $1.125 million to support the activities of the National Center for Missing & Exploited Children, which maintains an updated registry of websites that exploit children. Kudos to the three ISP leaders, and hope they serve to be a threat to mischief mongers and a ray of hope to the ones affected by the hazardous disease of child pornography.

If you thought Sony’s Break-Apart Controller was a great break-through for the gaming world, then think again! As now the latest scoop is that, the Break-Apart motion Controller was just a rumor. Sony plans on bringing up a controller which is a smaller-sized device that can attach to the body and provides the user the flexibility to use miscellaneous attachments with the controller.

There is so much of competition in technology delivering industries; every need of a user becomes a business for companies. What more! There is a war among the social networking sites as well. With the recent changes being made to MySpace, there seems like a war for attracting users between MySpace and Facebook. However, it looks good enough a change to make members happy as the site has become more user-friendly with simplified search tools, navigation, editing tools and the MySpace TV supporting high-definition video. One can have fun while editing their profile by changing themes, using colours in the colour palette, images and borders that is available in the library in the sidebar provided by the site. Go colour your space with MySpace!

And now go and colour your weekend with loads of fun. But don’t forget to be back on Monday for the best from the latest in the world of tech, gaming and science.