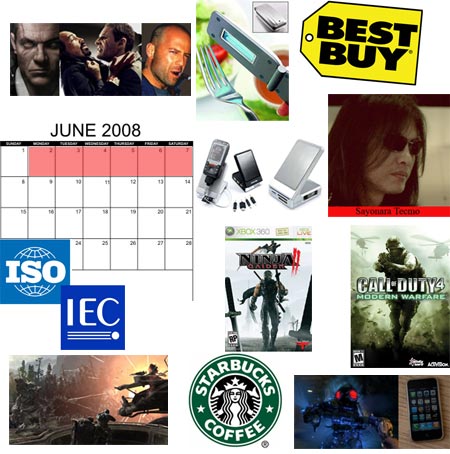 While on one hand there’s news about a new game’s launch, on the other there are simultaneous reports about the game’s creative brain quitting and suing his company. Shocking isn’t it!? Well, all that we can say is – We love it! Yes we do! This is what makes the world of technology, science and gaming so special indeed. You simply can’t predict anything at all. But one prediction that you can always make, which won’t fail to stand true, is we getting you the best from the latest in the world of innovation, launches and controversies.

Indeed a lot happened in the gaming front this week around. Let’s begin with the good news and then get on to the not-so-good one.
Call of Duty 4: Modern Warfare has hit the 10 million copies sold milestone in around seven months time since its launch. In addition, CoD 4: Modern Warfare’s downloadable Variety Map Pack achieved the mark of 1 million downloads mark in just 9 days. This explains why you saw beer cans and cake boxes being delivered at CoD 4: Modern Warfare’s developer Infinity Ward’s headquarters. Well, we raise a toast to you if you’ve been a part of the achievement by simply playing the game. That matters the most, doesn’t it!

Miami Vice’s Tony Amato, Die Hard’s Officer John McClane and The Sixth Sense’s Dr. Malcolm Crowe could now be all set to become Adam Kane Marcus. There is buzz around that Bruce Willis could be starring in the action game Kane & Lynch’s movie adaptation. Packed with some exciting action, the movie will have Adam Kane Marcus accompanied with James Lynch and the two will achieve their goals by retrieving a stolen microchip. The game has had stupendous sales, and if Willis steps into the game’s movie version we can surely look forward to some magic appearing onto the silver screen.
These games, we tell you, they love to play a lot of True or False games with us! You don’t believe us, then read on.

Popular title BioShock could soon grace the iPhone. Thought there is no confirmation on this news, if it does turn out to be true, then it surely is quite a dream come true for many gamers who own Apple’s revolutionary handset. The launch of the first person shooter game on the iPhone would be an amalgamation of action with elegance. We sit with crossed fingers, hoping for the speculation to turn into reality.

Now let’s get to some realities, one a delighting one and the other rather shocking!

Ninja Gaiden II is now available at retail stores across India. The Xbox 360-exclusive game title is the sequel to the well-known Ninja Gaiden. Japanese video game developer Tomonobu Itagaki has played a major role in its development. Be the good man and direct Ryu Hayabusa on a task to punish his clan and prevent the destruction of the human race in the latest title. Ninja Gaiden II is available in India for a retail price of Rs. 1895/-.

But taking away all the attention from this news was Mr. Tomonobu Itagaki who is reportedly quitting and dragging Ninja Gaiden’s development company Tecmo to court. The reason behind the same are some unsettled dues that Tecmo’s president Yoshimi Yasuda promised Itagaki for the completion of the Dead or Alive 4 game titles.

If you are obsessed with hygiene and cleanliness, then scan your articles with Zadro Nano UV Disinfection Scanner which ensures that the germs and viruses are off your plate and the device claims of an impressive 99.99% wipe-out rate. The UV disinfector does not require any special training, it can be used on an array of surfaces and within a span of 10 seconds the device renders the article germfree and virus free.

Being green is in! Best Buy has kick started its recycle program where consumers can get two of their electronic items per day to 117 of the chain’s stores for recycling purposes. Best Buy accepts electronic gadgets too. Best Buy has agreed to use vendors who will employ best recycling practices and not allow unacceptable export of hazardous waste. It’s not always all about the money indeed!

Now sip coffee while surfing the internet absolutely free of charge at Starbucks. The world’s yummiest coffee joint has announced to offer free Wi-Fi from AT&T at their coffee shops in the US. All that you need to do is purchase Starbucks Card, a coffee card. The free Wi-Fi service will be offered for two consecutive hours daily. This and much more is packed into that little card. And incase you aren’t a coffee lover (grrr) then too this offer sounds needs to be availed at any cost.

Now we get ready to sip some beer as the week comes to a close. But leave with a promise to be back next week.