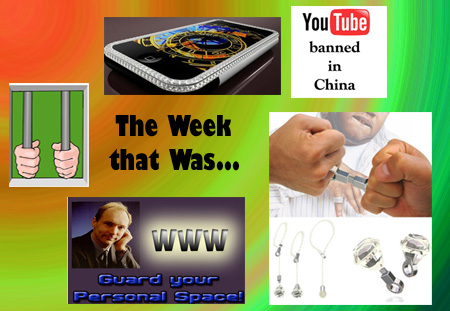 It’s a long holiday weekend for us here in India. But, this short week had some interesting happenings in the tech world. Was it good, bad or just so-so? All you technology freaks read on for a recap of the week that was.

One of the most-wanted bad guys in terms of technology was finally found and arrested. What did he do to get behind those bars? Well, for starters in 2005, the Spam King earned a whopping $309,000 from a spamming operation that saw him send out millions of spam emails with forged headers. How did he do it? He obviously used a botnet of zombified computers located at his company itself! Wonder how the Spam King didn’t see that one coming along in spite of being behind bars since last summer!

On a lighter note, here are some blinged out gadgets for those who like to live the high life. If you are not happy with the iPhone’s minimalist looks, and want a piece that will definitely blind everybody’s eyes in sight, then here is the iPhone Princess Plus. From the sound of the name, OK and also the diamond-dripping looks, we are assuming this one’s solely for women. The most expensive iPhone has 318 17.75 carat diamonds encrusted with 18 carat gold and will cut your bank account short of 120,000 euros. Can’t believe the price? Well, then there is always a 45,000 euro version of the Princess Plus for those who just have to have this blinged-up iphone, but not much of a bank balance.

It is official: Diamonds are indeed a girls best friend! Now, here is a ring for that special someone incase you are thinking of popping the big question but have no time to stand around in a Tiffany’s fStore for hours trying to find an affordable ring for the pretty girl. It’s known as the USB Flash Drive Swarovski Crystal Engagement Ring and is pretty self-explanatory. But, the best part is that the maker says that users will be able to transfer data between the two rings just by joining them together, the way you see superheros charge up their power rings in those cartoons. But, it really is funny, as in the pictures supplied, there’s a thug with golden front teeth doing the superhero thing with another ring! So, besides being a great engagement ring for your woman, we are thinking that this ring would also be a perfect prop in a hip-hop/rap video complete with the hommies throwing money around, banging their knuckles together and gorgeous women looking on.

YouTube has been banned again. This time it’s China, who has been busy creating a blood bath in Tibet. We think it’s terrible as this was done in an effort to keep the Chinese people from seeing the killings taking place in Tibet by their very own people. Whatever happened to people’s right to express themselves, speak and learn about what is happening elsewhere?

The Father of the Internet has officially warned all you photo-sharing, people who love to post every minute detail of your lives on social networking sites. And, Sir Tim Berners-Lee is right, as you most definitely will not want your child or perhaps grandchild asking you what exactly you were doing at the Iron Maiden concert looking like a messed up groupie. Well, it may seem all hunky-dory now, but you WILL have to do some explaining later! It’s all transparent nowadays you see, and it’s only going to get more accessible in the future. Don’t say we didn’t warn you!