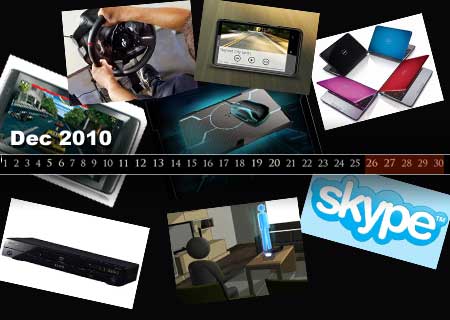 The tinkle of jingle bells, gifts under the Christmas tree, carols ringing out in the street, the bustle of snow-clad streets will soon come to a close. And as the saying goes, ‘All good things must come to an end’, and rightly so, the year 2010 AD is set to take its curtain call and make way for 2011. Although there have been a mountain heap of tech-related news that shook the world, we now focus on just the mole-hill of this week which was quite action-packed indeed. Skype took a lion’s share of the week’s news while the funky line-up is seen littered with a Blu-ray 3D player, bright notebooks and innovative mobile devices along with a couple of gaming goods that grabbed attention.

Giving Skype first preference here, we saw group video calls functioning as good as new as the necessary ‘mega-supernodes’ were conjured up. While PC users were enjoying chatting up with loved ones, Apple iPhone users could also make merry with mates strewn across the globe as a video calling feature was introduced in the form of a 3.0 upgrade. Skype to Skype video calls can be carried out while allowing owners to ‘go live’ via Wi-Fi or 3G connectivity. Two-way video calls can be conducted only through the iPhone 4, 3GS and iPod touch fourth-generation.

Offering an extension to the entertainment quotient is the Pioneer with its highly-anticipated Blu-ray 3D player portfolio for offering state-of-the-art theatrical experience. The range is composed of Pioneer BDP-430 and a pair of Elite models known as BDP-415FD and BDP-43FD. All these introductions provide pristine picture as well as audio quality. The company further boasts of quicker load times, Wi-Fi capabilities and streaming compatibility. Users can enjoy all their movies in 3D video via the most recent HDMI standard, 1.4a, enabling for passage of the high data transfer rate.

India was also in for a complete treat as Dell unveiled the Inspiron M101z notebook onto its shores. The model came all decked up to walk the red Christmas carpet drenched in vibrant colors and varied patterns such as clear black, peacock blue, tomato red with Jax pattern or promise pink with matching palm-rest. The ultra-thin laptops boasts of a 11.6” TrueLife HD glossy WLED screen and a full-width ergonomic keyboard with elevated individual keypads. Other attributes include a choice of several AMD Athlon II Neo dual core mobile processors with ATI graphics and up to Windows 7 Home Basic. While still looming around the country, we saw the HTC HD7 swimming into the ‘land of the snake-charmers’. Touted to be India’s first Microsoft Windows Phone 7, it enters the terrain packed with unique features and innovative design among other aspects.

The past week also rings with the echoes of ‘tablet wars’ with Archos 70 Android Internet tablet unleashing with 250GB HDD. The company claims this offering to be the slimmest and lightest product to hit markets. The device sports an unusual over-molded PVD stainless steel structured appearance and enables users to take complete advantage of its quick PC-like web surfing. They can also expect it to house powerful 1GHz processor, high speed Wi-Fi capability and high resolution capacitive touchscreen. All these goodies are neatly wrapped up in one single portable solution tagged at just $349.99.

Foraying into the gaming section, gamers seemed to look under the Xmas tree and in their stockings by the fire-place for the Razer Tron gaming mouse and mat. This duo encapsulates the signature light effects and illuminates in response to in-game actions. What makes this coupled gift more enterprising is its price tag of less than $130. While the Razer products kept PC players occupied throughout the festive season, console gamers were enticed with the announcement of the Thrustmaster T500 RS wheel and pedal set. There is a metal theme that is endowed through the 4.6kg wheel all the way down to the 7.3kg pedal set.

Amidst all the snow crunching and busy bustling streets, the past week has offered quite a plethora of goodies. Concluding this weekly is IBM’s vision of the world in 2015 but till then we have to really brace ourselves for 2011. The year is still in its pre-natal stage until tomorrow when it turns into an infant. It is looked upon as a babe that is full of promises and hopes of new and innovative tech treats. So here’s wishing everyone a very happy and joyous New Year.