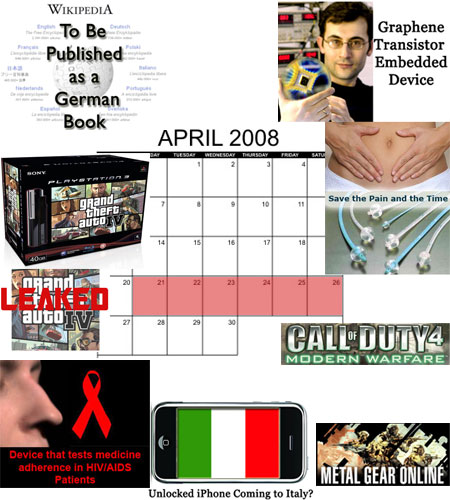 If one was to mark their entries for the forthcoming week, the one entry that we surely wouldn’t forget jotting down is the launch of Grand Theft Auto IV on Tuesday, 29 April, 2008. The game finally is going to reach the hands of all the gamers who have long waited for it since months. European gamers need to glee even more as an exciting GTA IV bundle, which comprises of a 40GB PS3, SIXAXIS controller, along with the game will be launched too on the same day. But while you’ve been good and waited for the official release of the title, did you know that the game has already been leaked on the internet. Bad boys who did that!

Talking about unofficial launches, our very dear iPhone is the undisputed king of being the centre of such rumors. This week there were speculations that the unlocked versions of the iPod-cum-phone device will be sold in Italy. What’s next? The unlocked version reaching the moon!?

Films being made into games and the other way around, movie adaptations of books are now things of the passé. But how would it sound if we told you that the popular online encyclopedia Wikipedia will now have a book version to it. Perhaps if you aren’t the one who likes turning pages than just skip to the next update, but if you do, then you would be happy to know that Publishing house Random House will publish the huge encyclopedia, consisting of over 50,000 of the most popular entries, in Germany.
While 50,000 sounds rather big, how about coming to something small!

The world’s smallest transistor has been developed by boffins at the University of Manchester. Made from a new material called grapheme, the new transistor is as small as one atom thick and ten atoms across. Claiming to work at ambient, room temperature conditions, this innovation is perhaps just “the” thing that modern electronics awaited. But hold on, further research needs to be conducted on the new transistors and it might take ten more years before the first integrated circuits on graphene chips are developed.

Zooming back into the gaming globe, there’s good news and there’s one bad one.

All you CoD4: Modern Warfare lovers, did you know that the Variety Map Pack of the title has set a new milestone for the number of paid downloads on the Xbox Live marketplace? The game has been downloaded over one million times in the first nine days of its launch. Amazing, isn’t it!?

Coming to the bad news, well, Konami has postponed Metal Gear Online Beta for the time being in the US and UK. The reason behind this – “extraordinary levels of traffic”. Has anyone ever said that too much of success can have adverse effects– if not, then I would like to copyright these words after what’s happened to Metal Gear.

The medical world saw a lot of interesting happenings too.

Dutch expert, Tim Idzenga, has devised a new microphone that measures the resistance of the urethra using sound. The microphone will monitor the urinary system and conclude the extent up to which the urethra has been compressed. This new invention sounds like a ray of hope to all ‘Benign Prostatic Enlargement’ (BPA) patients who are frequently administered with the traditional method of getting their urinary systems checked via a catheter inserted into the bladder via the urethra, as they can now bid goodbye to all the pain created through this old method.

Good news for all HIV/AIDS patients. Scientists at the University of Florida and Xhale Inc. have developed a special breath-monitoring device that keeps a check on the medication program of HIV/AIDS patients. This device, which is a tad bigger than a shoe box is not only a blessing for patients but will also let doctors and assistants breath a sigh of relief who usually have to be constantly on their toes. Alas, it’s yet in the testing phase.

See you back next week, same time, same place!