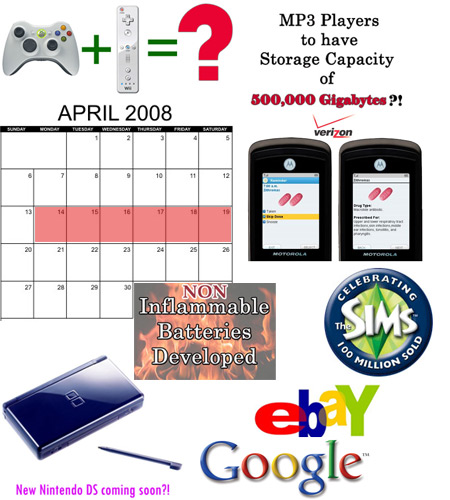 Your date with us on every Saturday night is a promise that we will never break. Summing up the best of the happenings in the ever evolving technology world, we are back to keep you appraised with all that’s hot and what’s not.

An apple a day keeps the doctor away. Well sure it does. But what if you didn’t listen to this advice and have to intake pills to keep you going? And the worst of all, your busy schedules and meetings make it impossible for you to keep track of such things. Well, the Verizon Pill Phone application is just what you need. Verizon Wireless subscribers can now get detailed drug information and automatic dosing reminders on their mobile phones. So don’t try and use the typical old lame excuse “I forgot to take the pill” because you may forget it but your Pill Phone won’t let you!

Guess where have a good amount of stolen military equipments landed? Log on to eBay or Craigslist and get your answer there. A report issued by the U.S. Government Accountability Office reveals that several military equipments which were stolen are being sold on eBay and Craigslist. Reportedly, investigators managed to buy a dozen of military items from both these online shopping sites from January 2007 to March 2008.

Kudos Google, for standing up against child pornography, which is undoubtedly one of the ugliest crimes that anyone can ever indulge in. The internet giant has developed a tool called National Center for Missing and Exploited Children (NCMEC) to track down child predators through video and image searches. Technology with sensitivity indeed!

If you saw smiling faces exiting Electronic Arts’ office, then here’s why. Their ever-popular title The Sims has reached the 100 million copies sold mark. The title which made its debut eight years ago in 2000 has the distinction of being the best-selling PC game of all time.

How would you feel if we told you that the 160GB humungous capacity of the Apple iPod Classic would soon be a thing of the past? You would perhaps turn around and say, big deal may be an MP3 player with a slightly higher capacity may be on its way. But you wouldn’t in your remotest thoughts guess that slightly higher would translate to 500,000GB. Trust me, I’ve not added any extra 0s there! Boffins have developed a molecule-sized switch, which would boost the storage capacity of the music devices by 150,000 times. This switch would enable almost 500,000GB to be fitted onto one square inch. But hold on, don’t get ready to throw your Classic out of the window. At present you would have to keep it as there’s no news on this innovative switch’s availability. Do you really think a lifetime would be enough to view or listen to all that’s stored in the astronomical 500,000GB MP3 player!?

Speaking about innovation and breathtaking technology, a news that surely needs to be mentioned is that of a non-inflammable battery. Yes you read it right! German researchers at Fraunhofer Institute for Silicate Research ISC have developed a lithium-ion battery, which is non-explosive. This new battery is based on a polymer electrolyte, which is non-flammable unlike liquid electrolyte in traditional mobile phone batteries. Alas, it will take a minimum of 3-5 years for these batteries to adorn our handsets. Wonder how many battery explosion mishaps we would have already reported by then.

Rumor time! MTV recently reported that Microsoft’s Xbox 360 will soon bundle a Wiimote-like controller. The speculated motion sensitive controller would be christened as “Newton” . If this was to be true, it would be quite an added asset to the 360. Here’s crossing fingers that speculations take the face of reality soon.

But if you prefer remaining a Nintendo loyal, then you need to wait until July 15th to know whether there actually something “Liter” than the DS Lite. Enterbrain honcho Hirokazu Hamamura’s mathematics have led him to predict that a new version of the Nintendo DS Lite could be launched at E3, which is scheduled to take place in Los Angeles on July 15th – 17th. According to Hamamura, Nintendo has had a pattern of demonstrating a new handheld in every two years time. While the Nintendo DS was rolled out in 2004, the DS Lite was launched in 2006, so can we actually expect anything in 2008!? Hang on till E3 2008.

And hang on till next Saturday for your next dose on technology, science and innovations.