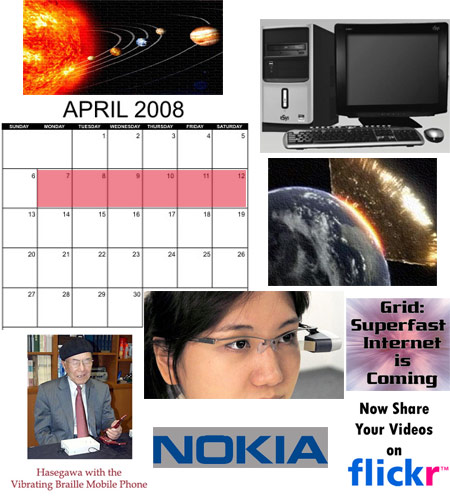 All good things come to an end, and so does this week. But before we bid adieu to what was, and welcome what will be, let’s throw a fair share of light on a few groundbreaking happenings that took place in the world of technology this week.

While India is currently experiencing a never-seen-before hike in price in practically every other product, here’s a company that is acting very reasonable, literally! eSys Information Technologies has rolled out a competitively priced PC in India, which comes with decent enough features and specs such as an AMD Athlon 3800 processor, 512MB DDR1 RAM, 160GB HDD, Combo Drive and a 17-inch CRT Monitor. Don’t you dare say “That’s it”, as you surely wouldn’t get the stars and the moon in Rs. 10,990/-, can you?

And just incase you plan to buy this PC, the first site I’d advice you to rush to is Flickr. Common, you can now add videos too onto this photo-sharing haven. This new feature of uploading videos will support video clips of up to 90 seconds, which are 150MB maximum in size. What’s more, Flickr subscribers can organize and share videos just the way they do it for photos. But the video sharing service can only be enjoyed by members who have a Pro Flickr account.

This week saw quite a few reports on technologies and inventions that will be commercially available in the future. Alas, we have to wait for them all.

Imagine the unbelievable with Grid, the superfast internet infrastructure that is being currently developed by CERN. The new technology is expected to be a whopping 10,000 times faster than the regular broadband speed. With that much speed combined with other powerful and innovative software, can you even remotely imagine what one can do in the future!? Well, I can’t, the reason being that I’m so excited that my brain seems to literally come to a stop!

Another thing of the morrow would be the Vibrating Mobile Braille Phone. Obvious from the name itself, this amazing device has been conceptualized for the visually challenged. When a caller pushes numbers on the keypad corresponding to Braille symbols, two terminals connected to the receiver’s phone vibrate at a specific rate to create a message. The digits 1, 2, 4, 5, 7 and 8, will be used on the mobile phones to represent these six dots, helping to generate Braille symbols. Technology for a noble cause indeed!

Your eyeball could soon be a movie screen? Does this sound absurd? It surely won’t in year 2010, as that’s when this exciting eyeglass-shaped retinal scanning display from Brother will be rolled out to blow your mind. This prospective display irradiates low-intensity light on the retina and scans it with the light at a high speed. The user recognizes the afterimage of the light scanned on the retina as an image. As against invasive head-mounted display (HMD) used an LCD panel etc, Brother’s retinal scanning display claims to offer a clear view. The image can be viewed in the actual scenery in an overlapping manner. What’s next, a camera in an inny minny eye lens that shoots pictures, you blink and Click Click?

After a sneak peek into the future, let me take you to the past, to the human core. The constantly debated topic as to whether terrestrial life on Earth was formed here itself or whether it arrived here from outer space has found some angle to it. A few scientists have found something that will surely support the stance that the origins of life were transported from outer space. Scientists believe that meteorites carried building blocks of terrestrial life.

Let’s go a little more into space. Believe it or not, scientists have discovered a new solar system which is very similar to ours. The planetary system is orbiting the OGLE-2006-BLG-109L, which is around half the size of the Sun. This newly discovered solar system, which is about five thousand light-years away, is compact from our solar system. Scientists are apparently on the brink of finding more solar systems like ours.

How can any weekly wrap up be complete by some mobile phone-centric news? And we won’t disappoint you this time either. Here you go. Nokia is developing a phone (so, big deal!) which is an iPhone killer. Well, now you don’t need to be an expert at rocket science to actually guess that the forthcoming phone by Nokia, called the Nokia Tube, will feature a touchscreen. The other features remain quite basic. Nokia you better make it quick, as Samsung’s Instinct’s may just beat you to this one!

Don’t scroll further, this is all that we could wrap into this week’s technology updates’ sum-up. The tech-o-fest shall continue next week.