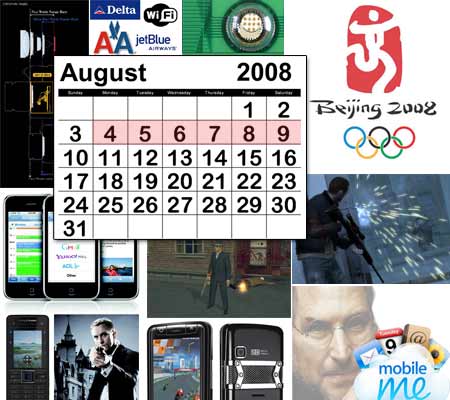 Its finally Olympic season and the world seems to be keeping its eyes and ears open towards the news and highlights from Beijing. Even the technology sector seems to be making good use of this season and introduces products and services that show off the Olympics 2008 theme.

Along with the heat of the Olympics, this week again saw Apple getting surrounded by rumors once again. Apple has been known to be encircled with rumors and this time, grapevine news contemplates an arrival of an iPhone Nano. If the Hype and craze about the 3G iPhone wasn’t sufficient enough, we may have one more innovation coming our way. Agreed that we all crave for smaller and sleeker gadgets, but how small can an iPhone get is a big question? Since the news still hovers around the grapevine zone, its only wait that can resolve the contemplation in our heads.

Next in the basket is Sony Ericsson C902 Phone that shoots in style with the stamp of the latest James Bond movie ‘Quantum of Solace’. Loaded with a range of 007 content, the phone captures crisp images on its 5MP camera with Face Detection, Photo flash and Auto Focus. The Phone also adds on James Bond content such as the trailer of the anticipated film, behind-the-scenes interviews with the stars and other content including wallpapers, screensavers and themes. The Phone is also used by Daniel Craig in the same movie, so James Bond fans can make a rush for this phone as it will be available only as a limited edition during quarter 4 of 2008.

Now here’s some good news for Photographers and the ones who have a keen eye for photography. Olympus Imaging Corporation (Olympus Imaging) and Matsushita Electric Industrial Co., Ltd. (Panasonic) in unison flaunt a new technology that will make SLR cameras thinner, lighter and ultra-portable. No longer do we need to stoop down with the heavy camera’s hanging around the neck as the new innovative technology will offer 6mm smaller lens mount outer diameter and the camera will no longer be a burden and it will provide a picture perfect image.

Around mid-week, Apple again made its entry into news columns with Steve Jobs admitting that Apple’s MobileMe application is not up to the mark. The application disappointed many iPhone users and Apple has learnt that launching the service before thorough testing is a huge risk that they are taking. While Apple is known for their perfection and elegance, MobileMe has shattered Apple’s dreams of being the best in perfection and style.

Coming back to the topic of Olympics, we have IOC and YouTube who will join hands together and bring us the latest broadcasts from Beijing Olympics 2008. This may sound cliché, but technology sure can deliver everything to our laps while we rest on our couches in leisure and comfort.

The Mobile phone has molded itself into various forms for various purposes. Now here’s a mobile phone from Spice Mobile which will cater to gaming-enthusiasts. The Spice X-1 phone tags itself as a gaming phone which packs in a gaming controller that will take the mobile gaming experience a level ahead. To lend support to the gaming phone tag, the phone also incorporates features such as a large 2.4 inch display with auto rotation feature, Yamaha-amplified 3-D surround-sound and impressive graphics.

Speaking of games, here’s a game that has ruled the gaming space for quite a while. Grand Theft Auto IV game has been highly popular with the Xbox 360 and Sony PlayStation3 gaming consoles and now the game makes its appearance on the PC’s. Rockstar Games announced in pride that the GTA IV PC game will arrive on PC’s in the UK on November 18th and on November 21st in North America.

Last but not the least; we have on more gaming news. EA’s Godfather II is based on Mario Puzo’s novel Godfather and the game goes beyond the novel by setting players in the world of organized crime in 1960’s Florida, Cuba and New York. Moreover, unlike its predecessor, the Godfather II offers many innovative features such as Don’s View, which will take the game to a higher level. Most of the gamers including Xbox 360, PlayStation 3 and PC owners will be able to enjoy the game once it hits the market in February 2009.

Beijing 2008 Olympic Games carry the message of friendship and peace and we hope that the message is well-received and we also hope that you enjoy the Olympic season and the weekend. This is the best of the lot that we could pack in for this ‘Weekly News Roundup’ and stay tuned for the latest highlights as we gear up for the next week of August.