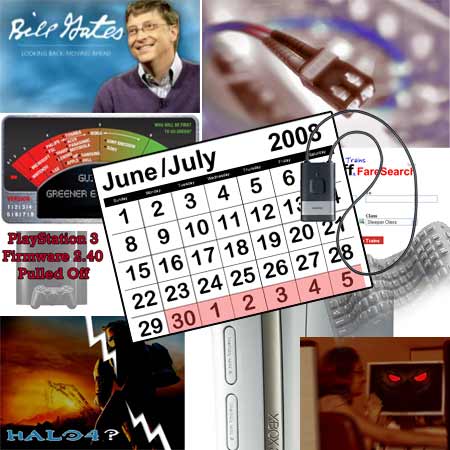 Here’s a warm welcome to the first week of July, we indeed started off with the hottest news from the world of technology. Last week we saw an array of news from the gaming zone; this week packs in a variety to the news columns with news ranging from software to hardware and general news as well.

We started off the week with Bill Gates waving a goodbye to his own creation, Microsoft. Bill Gates may be holding the Chairmanship position of the company but will not be involved in any day-to-day work of the company. The Chairman of Microsoft now plans on moving on with Bill & Melinda Gates Foundation which is a charitable trust founded by Bill and his wife.

Moving on further, one more news from Microsoft, we heard about the latest update on the grapevine which is the price cut for the Xbox 360 gaming console. The news is hovering between the rumor and confirmed status. Gamers yet are unclear about the pricing details of their popular gaming console. The expectation is that Xbox’s pricing will be slashed to approximately $50, whereas the current price ranges around $349. It’s only patience and a long wait which could clear the misty view on this gaming news.

If you have got fed up of the noise generated by your computer keyboard, then replace it with the latest Roll-Up USB keyboard which promises a silent typing experience and while shutting down your PC, roll-up the flexible keyboard and squeeze it in any crevice of your computer desk. Apart from the roll-up feature, the keyboard also happens to be very rugged with its resistance against dust, water and even acid and alkaline.

Technology seems to build new and innovative products for adding that extra bit of comfort to our lives, but technology also seems to behave in a responsible manner when it comes to nurturing and supporting the environment so that both can survive in unison. Initially, Nokia may have received the spot-light for introducing greener gadget but here’s the raw picture. Sony Ericsson seems to top up the charts in regards to supporting the ‘Green Cause’. The Greener Electronics Guide for June 2008 describes Sony Ericsson to be the greenest companies as compared to all others.

Well, that may be some good news from Sony Ericsson and to show you the other side of the coin, here is some bad news as well. A study conducted by ETH Zurich, Google, and IBM has reported that 40 percent of the internet surfers use insecure and outdated web browsers. This activity can invite malicious malware and cause issues to the computer with the attacks from the viruses. Its only awareness that can treat this issue and users need to know well if they are using a secured or insecure version of browsers.

To add on some spice to internet news category, Rediff provides a sigh of relief to Indian travelers. Now check for seat availability, enquire about fare price, get a comparative view of the lowest air fare ticket and many such options from ‘Rediff Trains Fare Search’. Snugly rest on your couch and log on to Rediff for checking of PNR status of your booked tickets, if you haven’t booked the tickets, get contact details of tickets agents across the cities who can book tickets on your behalf while you are busy at work.

Now that’s some great work from Rediff, updates and changes are inevitable. To bring in a change, Sony adopted a change by releasing the PlayStation 2.40 update. But if you thought things were running smooth, here’s a twist in the story. Sony pulled off the PlayStation 2.40 update and the reason cited for the backing out is due to certain issues experienced by a limited lot who complained about issues while installing the firmware 2.40 on PS3. Although the number of people who complained were a limited few but the quality conscious company thought of taking the firmware completely out of the system so that they can deliver the best experience to their consumers.

Although Sony may be quality conscious, but the general masses seem to be rigid for a change. It’s been quite a while since Broadband internet has been serving many of us dedicatedly. However, there are still a few who are apprehensive to accept the change. A research by A Pew Internet and American Life Project showcased that while 19 percent of Americans don’t think that it is possible to persuade them for upgrading to broadband while poor 14 percent are unable to get a broadband connection which is keeping them stuck to their dial-up one. And the rest of them think that broadband is too costly for them. It was concluded that Low income groups either are unable to afford Broadband connection or are rigid to accept the change to the latest internet connection.

Microsoft seems to be surrounded by rumors this week. Here’s one more scoop of rumored news about Microsoft where the gaming world speculates the launch of the Halo 4 game. The grapevine has mentioned that the fourth edition of the game is already in development and may be revealed during E3. As we wait for the confirmation of the price cut in the Xbox 360 console, we will also have to wait for confirmation on the arrival of this thrilling game to arrive to satisfy the thirst of gamers.

After all that hype in the gaming arena, presenting a gadget for the ones facing hearing issues. Nokia introduced its latest Wireless Loopset which is specially designed for the ones who use a hearing aid or cochlear implant. With Bluetooth compatibility, the accessory promises enhanced clarity and optimized volume range and frequency response.

So with a touch of variety in news, this week ends in a smooth manner with news ranging from gadgets to software and internet. This is all we could pack in for this week’s weekly news round-up and we promise to return back with a package of news for the next week. Stay tuned while we gear up and present to you the best news from the technology space.