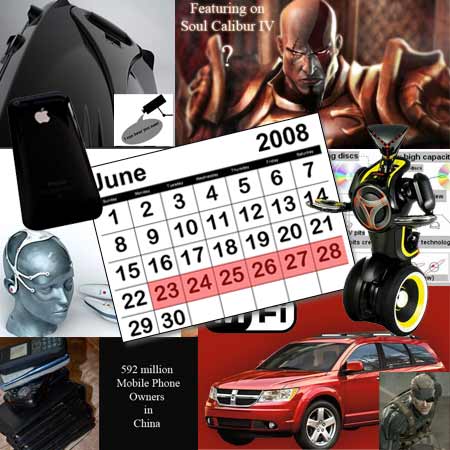 The week has ended and the Month of June is ready to bid a bye to us, we are back again with a roundup of all the interesting news for this week. This week saw some exciting news revolving around the gaming world which is sure to interest the hardcore gamers out there.

The week started with the knock on the door from the A.M.P robot from SEGA and Hasbro. This smart robot can not only deliver great quality entertainment but also erases your solitary room by dancing with you to the tunes of a few nice songs being played from its body. Its Dynamic Balancing Technology is the key to its tacky dance moves which dances in five different modes such as Dance, Track, Drive, Park and Follow. Running on six D batteries, three AAA batteries and an approximate price of $500, are you ready for a dance with this piece of technology?

Then we had Mr. Snake stepping in, where he had good news of selling over one million copies of the Metal Gear Solid 4 (MGS4): Guns of the Patriots game and this was achieved within a week from its launch date. Konami Digital seems to be delighted after crossing such a huge mark in its sale and more than one million copies being sold within a week definitely deserves a salute.

As we bid goodbye to Snake who is on his last mission in the MGS4 game, here is a futuristic gaming device which will blow off from your mind. Yes that’s right! The Mind-Controlled Nintendo Wii is ready to arrive in 2010, which offers control using brain-waves. So get ready to shoot and blast using your mind power.

While you get engrossed with a mind-controlling play, here is a surprise that waits in the Soul Caliber IV game which may feature our mighty hero, Kratos from the God of War game. If this grapevine turns true, then the PlayStation 3 users may be able to enjoy an adventurous game of Soul Caliber IV game with the might and power of Kratos in the game.

Moving out of the Gaming zone here’s placing the spotlight on the gadgets and devices which not only offer comfort and convenience but also offer security and safeguard us from the dangers of the big bad city life. CCTV Cameras have always been useful to detect crime. To make these cameras more useful, researchers at University of Portsmouth have developed a CCTV camera that can sense the suspicious sounds such as breaking glass, someone shouting, or the noise of a crowd gathering. Thanks to the artificial intelligence software, that helps camera to detect and solve crime.

As the CCTV’s look and hear you carefully, if there was a complaint regarding heavy baggage at the airport, here comes Technology to the rescue again. Presenting the PA case from a UK company named Live Luggage which claims to reduce the load off your luggage with its motorized wheeling system. The case has a smart system fit on to it which balances itself well and just needs direction and the suitcase will automatically drive itself to the desired destination.

And if you plan on traveling to China, then don’t be surprised with the amount of mobile owners over there. China, known to be a populated country, now the country also tops the charts in the mobile phone usage as well. China has been reported to have a high amount of mobile phone users, where the limit has crossed the 592 million mark.

If such a large number did not give a punch effect then invite the super-capacity DVD offering 42 GB of storage which has been developed by the Institute of Multidisciplinary Research. The special DVDs are developed by using V-shaped DVD’s as opposed to flat pits on the DVD’s recording surface. Researchers claimed that, the same method can be used for normal CDs for increasing its capacity. Unfortunately it can not be applied to Blu-ray discs.

While we are speaking huge numbers here, here’s one more topic that adds itself to the list. Apple plans on releasing 15 million units of 3G iPhones in the third and the fourth quarter of 2008. The popular and ravishing iPhone seems to be in great demand that companies are offering the phone on pre-order basis.

Technology loves to present itself everywhere, now get Wi-Fi connectivity in your car itself with Mopar’s uconnect web which offers Wi-Fi connectivity in the Chrysler LLC’s Jeep and Dodge Vehicles. Add in style to your driving as you drive along you car and also use the internet using you Wi-Fi enabled phones or laptops.

The new-age technology is sure to drive us into the days of future and make our lives really comfortable and relaxing. With this we end the week of June and promise to return back next week with more scoop of news that will keep you updated and up to the mark with the latest shout outs from the world of technology.