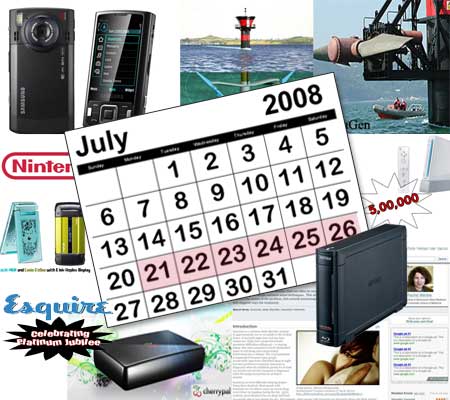 The week started on the cloud with CherryPal launching their latest cloud computer. The light-weight and compact PC claims to be the most energy efficient and does not rip apart your wallet as well. As technology places its steps forward, gadgets are getting smaller and compact. The device uses just 2 watts of power and features 256MB of memory and a 4GB Flash drive within. With its great efficiency, the device surely will promote the idea of introducing more energy efficient and eco-friendly products.

Now as we speak about power consumption and eco-friendly gadgets, here is something huge and hefty that’s sure to blow you away. Seagen also known as Marine Current Turbines have come up with an innovative energy generator that uses tidal power. The huge power producing plant is yet under testing and commissioning phase and after it is out of the phase, the huge machinery will be ready for churning energy with the use of Tidal power.

Let’s move on to some celebrations now. We all love celebrating our birthdays and anniversaries but some of us love to splurge on big things in life. Popular men’s magazine, Esquire celebrates their 75th Anniversary this year and to provide a grand celebration, they plan on providing a fab look to their magazine. The October issue is all set to be dressed with the help of next-gen digital technology using electronic paper (e-paper). The e-paper will be fuelled by batteries which will provide a lifespan of 90days. Since transportation will be an issue, so the publication plans on dispatching the e-paper via refrigerated trucks. Now that’s called taking technology two steps ahead.

After that good news, here is good news for Nintendo who are proud to have sold 5,00,000 Wii Units in Australia. Nintendo sure seems to be popular in Australia where in just a span of 84 weeks they have sold out such a huge amount of the Wii Gaming consoles. With gigantic competitors such as the Xbox 360 and the Sony PlayStation 3 gaming consoles, Wii definitely needs a pat on their back to have achieved such a huge success.

Big things in life do not come that easy; this line fits well for Nintendo as gamers complain on the no storage facility on the gaming consoles. However Nintendo promises to restore the faith of gamers by solving the current situation. Nintendo plans on resolving the issue, so that gamers can store data on their gaming consoles very soon.

One more news from the Nintendo room, where Nintendo happened to apologise to fans for offering few hardcore games at E3. There was an expectation from gamers that Wii will provide a glimpse of Super Mario or Legend of Zelda but they were disappointed that not many details were revealed.

Competition seems to exist in every field, so how can we forget websites. Even websites are now in the competition battleground with Google launching their website named Knol which happens to be a Wikipedia rival. Following the footsteps of Wikipedia, Knol will also pack in various topics under the sun. Knol stands out differently as compared to Wikipedia in terms of the content where every article gets penned down by the expert in that subject.

We all crave for variety and change in our lives, what if our mobile phones go for a change, which would surely be a pleasant surprise. Hitachi and Casio mobile phones which present the E Ink Vizplex Imaging Film based displays. With a colorful and artistic look, the phones happen to be the first ones to feature this technology. Innovation at its best, the phones look dashing in their design and art.

If that was innovative technology, check out the latest Samsung innov8 Phone which proudly shows off its 8 MegaPixel Camera. Also known as Samsung i8510, the slider phone is amazing for clicking away those golden moments with features such as smile shot, blink shot and face recognition. With a 2.8 inch 16M color LCD display, the phone wraps in latest connectivity options such as Bluetooth, HSDPA and Wi-Fi.

Experiencing Technological advancement is nothing new for the world of technology, now here’s one more in the line. Buffalo has unleashed two Blu-ray burners in the Japanese market and they claim to be the first burners launched. The BR-816FBS and BR-816SU2 Blu-ray burners load on disc features capacities of 25GB (single layer) and 50GB (dual layer) and to top it all users can even purchase the internal or external drive.

This surely seems to be a lot of improvement in the space of technology that promises to offer us the best comfort and convenience and also adds on the responsibility of being eco-friendly and energy-efficient. So we end the week with this complete dosage of the weekly news from Techshout.com and we promise to return back next week with another scoop of weekly news roundup.