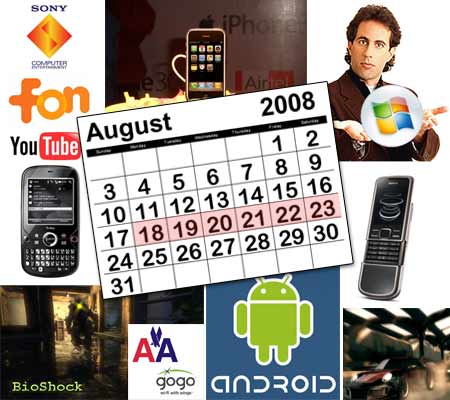 The week kick-started on high gear with the announcement of the release date of the ‘Need for Speed Undercover’ game. The game that pumps high doses of adrenaline will feature international movie star Maggie Q. The game promises a rich experience which features a Hollywood like feel. Enjoy the power of octane with top gear cars that will have to battle the ‘brake-neck’ cop chases.

We have heard of the Nokia 8800 Arte quite a few times on the news columns, the phone has been dressed in diamond, ruby and other jewels in the past. The Phone presents its rich features and specifications to the news columns once again. The Phone that will launch around Quarter 3 of 2008 will feature a smart slider mechanism that shows off its sleek charm and style. After the touch-screen iPhone made it to the ‘Hype’ zone, glass surfaces on phone have become a style statement to grab attention. Even the Nokia 8800 Arte packs its exteriors with carbon fibre, titanium, polished glass and stainless steel. The Phone also boasts off a special way of silencing calls which is turning the phone over, screen-side down.

Now here’s one mobile phone operating system (O.S) that’s been waiting to be launched. The Google Android has been waiting to get its approval from the Federal Communications Commission’s (FCC) and now the O.S finally gets its nod from FCC. T-Mobile may be the lucky one to present the Google’s O.S. through HTC Dream. The O.S from Google may disable you from the Bluetooth transfers due to security reasons. So users who love to transfer songs and pictures among their friends can keep their hands off this O.S.

The Popular video sharing website YouTube has always made its rounds to the news columns, this time YouTube is all set to test ads on its mobile version of Youtube. The site plans on testing a few ads on a few display pages of the YouTube Mobile site in US and Japan.

Have u been terrorized lately? If not get ready to face the shrills and spine-chilling action as the release date for BioShock for PS3 has been announced. The game will arrive on PlayStation 3 consoles on 21st October in North America and on 24th October internationally. The game also packs in a lot of latest content which will also feature Survivor difficulty mode, Trophy support and Add-on Game Content.

Next on the list is again a ‘mobile phone’ news. The Smartphone from Palm – Palm Treo Pro Smartphone finally gets officially announced. For a few weeks, the phone was lying around the ‘contemplation’ table and the news was termed as ‘leaked’. Now the company provides an official word about its arrival. The feature-rich phone incorporates a variety of features that include email, Wi-Fi, GPS, Microsoft Direct Push Technology, MS Word and Excel file access and many other features. The Phone although may be a business phone, but sure does not forget to attach a classy and chique style statement. The Palm Treo Pro Smartphone flashes off its stylish sleek looks and glossy textures and smart QWERTY keypad.

If you thought the latest advancement in the world of technology was use of mobile phones on a flight, well think again as there’s a huge surprise! American Airlines jumps on and tunes its fleet of flights with WiFi connectivity. Alongside WiFi connectivity, the airline also places its spotlight on the ‘Gogo’ the broadband service by Aircell. Next time you won’t have an excuse that you were unable to access your mails as you were on a flight. Enjoy wireless connectivity of broadband even while you are traveling by air, now that’s called a step ahead in technology.

You must have sure spotted Jerry Seinfield’s pictures on the news columns recently. Wish to know the reason why? Well Jerry has been the chosen one who may be featuring in Microsoft’s latest ad campaign. As per reports even Will Ferrell and Chris Rock were considered for the ad campaign. The final verdict is yet to be out, however the slogan of the ad campaign may be “Windows not Walls”.

Mobile Phones seem to be ruling over this week, Here’s one more update from the mobile phone zone. The much awaited and highly spotlighted phone makes its appearance in India. At the stroke of 12am in the night, India’s popular network carrier Bharti Airtel proudly presented the iPhone 3G to India. Although the phone may be 3G capable, the carrier is yet to receive the permission from the government for the use of 3G services in India.

Rounding off the last news for this week is another WiFi related news. Sony Computer Entertainment and FON have announced their collaboration to provide free internet service for PSP players in Japan. FON WiFi service has been already made available to PSP players in Japan that has 44,000 FON spots all across the country. Unfortunately, the team’s plan for extension service for PSP users across the world has not been announced. Users can now download themes, wallpapers and game demos and much more with this free service.

So to conclude, the week sure saw a lot of updates from the Mobile phone arena. So here we take leave with a promise of returning back next week with a huge dosage of news and latest updates from the Technology space. Stay tuned for the latest news and shout-outs from the world of technology.