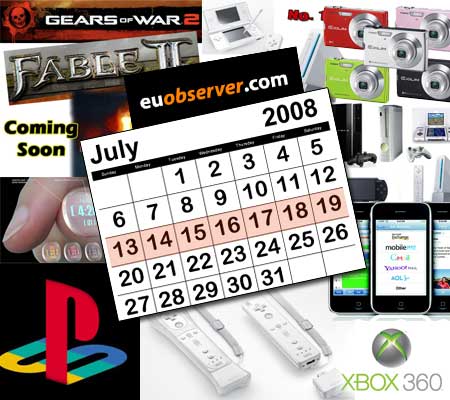 So we are back again to the weekend where we collate all the interesting and the most happening news in the Town of Technology and present it to you in form of Weekly News Roundup. This week we have had a basket full of news that created ripples in the world of technology.

Starting off with the surprise thrown in by Microsoft who shook the news columns and gaming zones. Microsoft announced at E3 that the 20GB Xbox 360 model will face a $50 price cut and if that news wasn’t sufficient to shock gamers, Microsoft also announced the availability of the new 60GB version Xbox 360 gaming console. The huge 60GB storage space gives users to store more data such as music, movies, television shows and game content as well. The 20GB Xbox 360 will price itself at $299 in US and Canada and the 60GB version launches at a price of $349.

If that news was ground-breaking, check this latest piece of technology from Casio that boasts to be the Slimmest Camera. Casio Exilim Zoom EX-Z150 is the camera that Casio proudly holds up high to be the slimmest camera which is merely 20.1 mm thick and it measures 18.9 mm at the thinnest section. With a 8.1 MP resolution, a CCD-shift anti-shake function and a wide-angle zoom, the camera is sure to click away in complete style and clarity.

The Next news that stepped in from the gaming world is the Nintendo Wii MotionPlus Accessory. Nintendo showed off its latest accessory for the Wii Remote controller, which is Wii MotionPlus that provides the player a more comprehensive tracking of the arm position and orientation. The accessory provides a great game-play with the combination of Accelerometer and the Sensor bar that is included in the accessory.

One more news from the gaming room that created ripples was the announcement of the release dates of popular games such as Gears of War 2, Resident Evil 5 and Fable 2. The scheduled dates for arrival of the games are as follows: Resident Evil 5 will release worldwide on March 13, 2009, Fable 2 is scheduled to be released for the month of October 2008 and the much awaited Gears of War 2 will make its entry on November 7, 2008.

To provide tough competition to Xbox 360’s latest news, Sony stepped in with full rage by making a list of announcements. Following the footsteps of Microsoft, Sony Computer Entertainment America launched their latest Play Station 3 with increased storage as well. The gaming console now gets fuelled with 80GB storage capacity and also limited edition versions of PlayStation 2 and PSP are all set to reach the stores very soon.

After all the news from the gaming zone, let’s move on to some good news that Apple received recently. Apparently, Apple has sold 1 million 3G iPhones sold in 3 days and to top it all App Store sees 10 million downloads. The Apple iPhone has always been pampered and adored by several users. Now that the 3g iPhone steps in, people are ready to grab it up before it goes out of stock.

Let’s step in to the future with the latest development in the world of technology that brings us the futuristic Timex Nail watch, which is a smart watch that can be worn on the nail and it features all the functionalities of a standard watch. The fact that it is a disposable watch might lead itself into a doom zone and also it looks a little geeky. However we respect the technology and the creativity explored by Timex and we are sure that there might be quite a few buyers of this device.

Looks like gaming news has attacked this week again, here’s one more news from gaming arena which provides a pat on Nintendo’s back. As per the June NPD sales data, it looks like Nintendo Wii is racing away to glory. As per the data Nintendo’s sales have surpassed Microsoft’s Xbox 360 sales. Now that’s sure a lot of good news in favor of Nintendo.

And here’s one more goody basket heading Nintendo’s way, Nintendo’s Wii has topped the best selling chart once again after 20 months in US. By selling more than 666,000 units, Wii has outsold Xbox 360 and PlayStation 3 in June. Not only the Wii but also but Nintendo DS has also topped the charts of June 2008 in the portable gaming consoles category. The DS could sell more than 783,000 units in the US market in the last month.

We have numerous sites serving us with services like ringtones, wallpapers and games for mobile phones and that too with a claim of cheaper price. However, most of the sites are a clever trap of long-term contracts that will get you high mobile bills. To save us from these traps, European Union conducted a crackdown and has found 80 percent of the 558 websites it investigated to be fraudulent. Shocking isn’t it? Especially children and teens should learn a lesson from this as they have been found to be the most vulnerable set of consumers falling for these traps.

So with a cautionary word and a basket full of news from the gaming world, we end the week with a huge news load from the Technology space. As per our promise, we are sure to return back with another week full of news and latest shout outs from the technology zone.