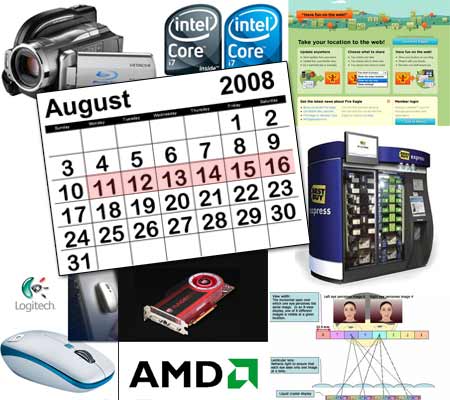 Again we are here with weekly roundup that would give you insight of the interesting happenings in the arena of technology world. There were many of the breakthrough news this week that would take us one step ahead in terms of technological development.

This week was started with the good news for all bachelors in India seeking the ‘right life partner’. Association of Shaadi.com with Vodafone is availing the matrimony services right in users’ hand. They can now take an advantage of Shaadi.com services on their mobile phone through WAP, text messaging and Voice. All users have to do is call 57007 or SMS ‘Shaadi’ to 57007or on Vodafone live! by clicking on shaadi.com link on Vodafone live! So they can find their perfect match from anywhere anytime at the nominal cost.

This week also saw Hitachi announcing the DZ-BD10HA next-generation Blu-ray Disc Hybrid Camcorder. The novel feature of the latest camcorder is its capability to record onto the next generation HD format, Blu-ray. In addition, the camcorder also facilitates to editing functions such as split, splice, delete, merge, and transitions within the camcorder. Moreover Full HD video can easily be transferred with the push of a button from either the HDD or SDHC card to the BD drive without having to connect to a PC.

Even there is some good news for developers too in this week. Yahoo has introduced Fire Eagle, an open platform that will allow users share their location while availing them to control how and where their location data is shared. Users can store and manage information regarding their location. The latest product from Yahoo also lets developers to clear protocols for updating or accessing that information. In addition users can also annotate the world or find nearby services or local information through Fire Eagle.

Now moving towards some computing news, AMD has unveiled Radeon HD 4850 X2 and 4870 X2 Graphics Cards. The latest graphic cards promise to deliver high performance at more than 2 trillion operations a second. Graphic cards are targeted at gamers. The 4850 X2 is equipped with 2 GB of GDDR3 memory, while GPUs are clocked at 625 MHz.

On other hand, Intel has announced its latest range of desktop processors which will be named as Intel Core i7 processor. The upcoming processors are microarchitecture will deliver high performance and energy efficiency. However users can take advantage of Intel’s Core i7 processor only in 2009 as processors expected to go in production in this year.

There is little more computing news, Logitech has unveiled a new mouse for notebooks. What makes the V550 Nano Cordless Laser Mouse is its Clip-and-Go dock. This allows users to clip the mouse to the notebook while on the go. The main plus point of this feature is, users do not forget their peripheral anywhere. Apart from that the V550 Nano delivers tiny receiver, which can be plugged and forgotten. Longer battery life of 18 months is another key feature of the mouse.

There was one more breakthrough in the world of computers. Fujitsu Siemens’ SCENICVIEW ECO “Zero-Watt” Monitors, which virtually draw zero power while in standby mode. In addition monitors shuts it down completely when the computer signal is not present automatically and turns it on again when the signal reappears. The Zero Watt monitors are not only conserve energy but also save money. Fujitsu Siemens claims that thanks to energy conserving feature, one SCENICVIEW ECO monitor can save several euros per year.

Also there is some news from software giant, Microsoft. Windows Vista which was not well received as most of features failed to give what was expected from them. After it has bore the brunt of low shares and a downfall of user base with clients backing out to use Vista, Microsoft is being very cautious and tactful in preparing the next OS – Windows 7. Microsoft has started an Engineering Windows 7 blog through which it will be sharing technical details and taking in needs of consumers via the feedback. And if all is well, you might see a revisited Vista by 2009-10.

Last but not least, Epson has announced the development of 3D LCD, which can be viewed without any special glasses. Epson high-definition 3D LCD is all set to revolutionize the standards of 3D LCD screens. Epson’s LCD comes with an optimized view width of 31-32.5 unlike the traditional 62 to 65 mm that gives a poor 3D image due to loss of resolutions. It also comes equipped with the 3D pixel array technology for superior viewing experience, sharper display and vivid 3D images. Now-a-days developers are coming up with high-performance graphics cards for realistic gaming experience, it is better to have a screen that elevates the performance of the latest technologies and optimizes user experience.

This week has ended with the many technology advancements and each day we are putting a step ahead towards making our life easier and happier. Not only human life but development of eco friendly products expresses care for nature making the world better place to live in. With this we end this week’s Weekly Round Up. You have nice weekend and a great week ahead while we return with latest updates in next week’s Weekly Round Up.