The hype surrounding the Samsung Gear S2, which happens to be the company’s first smartwatch with a round face, has just increased furthermore. That’s because a fresh video showing the device in action has been released, as sort of a teaser of its actual IFA 2015 arrival.

One big revelation that has come out of this video is that there’s every possibility of the Samsung Gear S2 smartwatch featuring cellular connectivity for calling and messaging. If you watch the clip closely, you’ll be able to spot icons of the messaging app as well as the calling app at one point.

Apart from that, Samsung’s proprietary services like S Voice, S Health and more can also be seen on it, thus confirming that the device won’t be running Android Wear. The next choice of course is the South Korean giant’s very own Tizen OS. 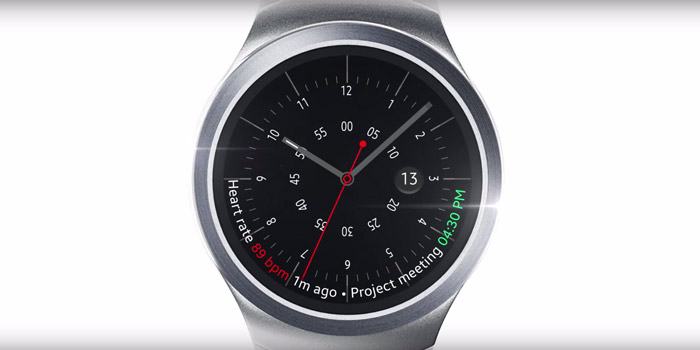 You might have noticed that Gear 2 features a rotating bezel. If you haven’t, watch the video again to witness how it will be used by the smartwatch for letting you navigate through its interface. One of the watch faces, an image of which we’ve posted in the space above, shows minimal notifications placed around the watch face to not disturb the visuals much.

Samsung also seems to have equipped the gadget with a heart rate sensor. Along with that, all the necessary sensors for the tracking of your fitness are also expected to be present inside it.

September 3 is the date on which the Samsung Gear S2 smartwatch will be unveiled to the world at the IFA stage in Berlin; so stay tuned.