Wal-mart to Discontinue Sale of Green gPC in their Stores 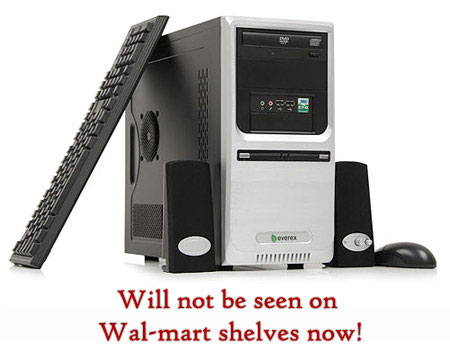 Wal-mart has announced its plans to discontinue the sale of Everex’s Linux-powered Green gPC. Wal-mart said that it is stopping the gPC from its stores however it will continue to sell these online.

The Green gPC was initially launched in October 2007 for $199 and came embedded with Linux OS with Google software.

The Everex TC2512 Green gPC2 is equipped with a 80 GB 7200 RPM hard drive, combo DVD-ROM/CD-RW drive, 512 MB of RAM, a VIA C7-D Processor running at 1.5Ghz. However, standard peripherals such as speakers, mouse and keyboard, with the monitor are not included with the PC.

Wal-Mart Stores Inc. spokeswoman Melissa O’Brien said, “This really wasn’t what our customers were looking for.”

On the other hand, Paul Kim, brand manager for Everex said that the gPCs are going better in the online market as compared to the physical stores.