The OnePlus One has been very successful around the globe and a successor is also in the works, but it looks like we could see a mini version of the flagship killer arrive first. A compact version of the Cyanogen-powered handset has been leaked online and it comes with a 64-bit processor onboard.

Dubbed the OnePlus One Mini, a couple of images of the smartphone have hit the web. The phone basically looks a bit similar to the One handset, but it’s just 5 inches wide. And there’s no word on the screen’s resolution as yet, but AnTuTu confirms that the device is powered by the Qualcomm Snapdragon 615 chipset. 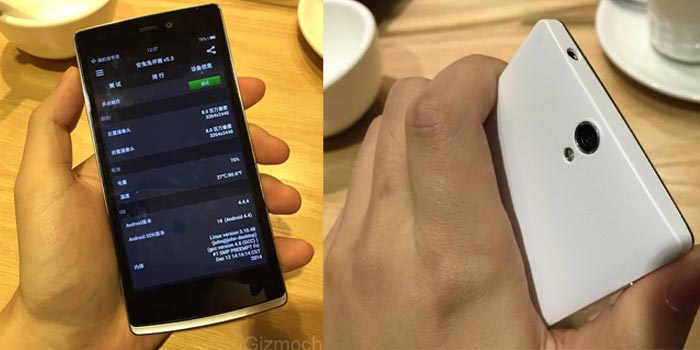 This SOC is basically used in mid-range handsets like the Desire 820 from HTC and Oppo’s R5. So based on this, the One Mini might also fall in the same category. The benchmark software also highlights that Android 4.4.4 KitKat will come preloaded.

Also read: Now, OnePlus One gets slapped with a ban in India

Now, while the information provided by GizmoChina looks authentic, we still have our doubts. Firstly, there’s no mention of the handset being made by OnePlus as the company’s logo isn’t visible on the front or rear panels. And Chinese OEMs are known for creating high quality knock-offs of popular devices, so we’d recommend taking these details with a pinch of salt.

A compact version of the OnePlus One would be a great release considering that many customers find the 5.5-inch display too big and would prefer something smaller. Also, the little known specs are pretty appealing, but we’ll have to wait for more info on the device before jumping to occlusions.

Samsung May Not Release Galaxy Note This Year, Focuses On Foldables

Samsung May Not Release Galaxy Note This Year, Focuses On Foldables