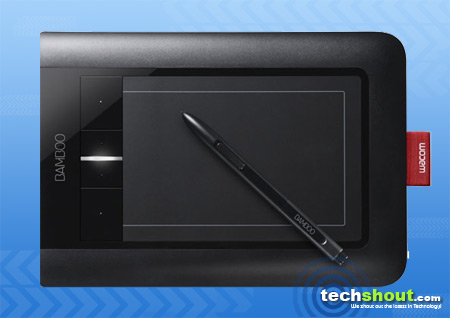 Ruminating that a new range of Bamboo tablets are a more elegant option, we bring to you an exclusive review of the Wacom Bamboo Pen and Touch tablet. Breaking the conventional method of using a tablet, Wacom gets something interesting with this one. Renowned for offering users with highly functional tablet, it’s nice that Wacom now adds the Bamboo Pen and Touch tablet to its basket.

Exquisitely designed, the Bamboo Pen and Touch model works as both a traditional graphics tablet with the supplied stylus and as a trackpad, but there’s also a finger-only Bamboo Touch model that’s essentially the same. Well, the tablet is slightly larger than a sheet of A5 paper and its touch-sensitive area measures 125mm x 85mm. The structure is made from the same kind of matte plastic as many laptop trackpads and feels pleasantly smooth.

The placement of the buttons makes them a stretch for fingers when using the Bamboo with one hand. The Bamboo Pen & Touch works as a multi-touch trackpad with a fingertip, but it only recognizes two points of contact. Although, the device offers two-finger scrolling and usual pinch and twist gestures, it still fails to offer the same three- and four-finger gestures as on Apple’s new MacBook Pros.

Using the Bamboo with a fingertip is pretty much like using a laptop trackpad, although the half inch of dead space on either side (well inside the border that delineates the touch-sensitive area) was an annoyance. The large surface area may mean that you need to fiddle with the pointer speed settings until you find a setting that works best for you, but sadly, no amount of fiddling could make the Bamboo to work to our complete satisfaction.

Although it worked fine with the stylus, the Bamboo Pen and Touch seemed unable to track a fingertip smoothly and would regularly register finger swipes as both single and double-taps (the latter is supposed to require a two-finger tap). Two-finger scrolling was also subject to lag in some applications and wouldn’t work at all in Firefox. Further, its large touch-sensitive area can identify even the slightest of touches, causing the mouse pointer to jump around and bringing the risk of inadvertently clicking something by accident.

What we really liked about this tablet is that it embodies a larger active area compared to other traditional mobile phones and laptop trackpads. Now, scrolling through documents, navigating the web, zooming in and out of photos, and rotating images are made effortless. Also, if hankering to edit some photos, then don’t get tensed. Just pick up the pressure-sensitive pen to edit, create personal greetings, sketches, and mark up documents in your own handwriting. To make sure that your creative pen doesn’t go lost, the device incorporates an attached pen loop that conveniently stores it. There is also an easy USB connection to Mac or PC, laptop or desktop.

Although, this black colored tablet offers immense ease of usage and turns out to be quite creative or enthralling for your workplace, it’s not for hardcore tablet users. And, if you are thinking that this tablet is a replacement to the traditional mouse, then you’ll experience that it’s not. It somewhere lacks in delivering as amplified comfort as mouse offers. If you are new to it, you would know what we are talking about.

To conclude, we would rather say, the tablet will be of great benefit to those who are more into editing or drawing. If your work involves more of fine drawing or creative editing, then you can certainly spend on this affordable and dynamic device.

Pros: The enormous touch-sensitive device offers remarkable touch pad and pen functionality and is apt for aggrandizing your drawing or editing skills. You will find it easy to zoom in/out, basically the pen is great for honing your drawing and creative skills. It also comes with easy to use software, customizable buttons and works well as graphics tablet. Enough qualities to own?

Cons: You may get quite distracted with its button arrangement. Touch surface is too annoying for comfort. It doesn’t endure complex gestures like rotate and sometimes the tablet interprets a two finger swipe for a right click. In fact, you’ll somewhere discover a noticeable deferment between completing the gesture and browser response. Besides, there is regular misidentification of finger taps, guess you would hesitate trusting it here. The device has quite dead areas on trackpad while its driver lacks sensitivity control.

Though not overly convenient to use, the Bamboo Pen and Touch tablet still possesses certain quality features. The package offers you a quick start guide, an installation CD (with driver software, interactive tutorial and user’s manual) alongside a software CD (containing Adobe Photoshop Elements 7.0 Win/6.0 Mac and Nik Color Efex Pro 3.0 WE3). The modish tablet can now be grabbed just for Rs. 4,644. Deeming every single aspect, we rate this tablet an 8 on 10.