Vuzix Wrap 920 Review: Offers a peek at the future of video viewing 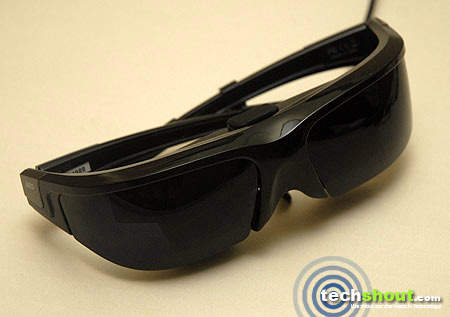 With absolute fanfare, that’s the answer. There’s no other way to welcome a pair of video glasses which promises to have entertainment clinging to your eyeballs. Just this week, we had the serene office environment all shaken up by a tempestuous new arrival. The Vuzix Wrap 920 we intended to review may not be the first pair of video eyewear from the company, but it’s still a gadget that cannot fail to induce excitement by a mere mention. It’s a slice of the future in the here and now, after all.

The Vuzix Wrap 920 was accompanied by the sort of bric-a-brac you’d expect to find bundled with any device of its ilk. The extensive list of accessories includes a pair of stereo earphones, multi-connect connector, cable management clip, control box, composite A/V cable for iPod/iPhone/iPad, focus adjustment tool, composite A/V cable (RCA-female), tether strap, cloth pouch, user manual, safety and warranty booklet, AA batteries and earphone noise isolators. On pulling out the eyewear we realized that Vuzix had managed to sign on a marvelous product photographer for the Wrap 920 since they barely resemble the photos up on the company’s website.

We’re not saying that the glasses are ugly, but this pair’s beauty can be compared favorably against dental headgear once you attach all those wires. There’s a simpler way of assembling the apparatus if you don’t like breaking a sweat while doing such things – just get a random kid to put it together by pretending it’s a science project. The entire set up looks cool enough to be one and the promise of giving him a peek ought to help the cause. From the outside, the Wrap 920 has the appearance of regular pair of black glares although they may feel noticeably heavier than your standard shades at around 3 ounces. 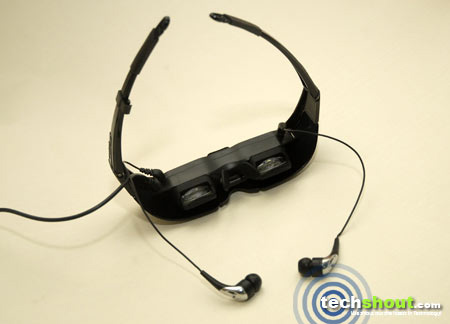 Two earphone cords dangle from the right and left sides for each ear and the composite as well as multi-connect cables must be used to pair the control box and eyewear. The last mentioned also functions as the battery compartment for powering up the gear and accommodates a couple of AA batteries. You can get the show going with anything hosting a compatible port such as PCs, notebooks, Apple devices, camcorders, portable DVD players and phones. Basically, the gear is crafted to work with almost any NTSC or PAL A/V device extending video-out capabilities.

We got down to testing this pair with our iPod touch and The Holiday. One thing you need to settle for is the fact that you have to be leaning back in order to have the glasses perching restfully upon the nose before attempting to merge the wee little screens into one display. We grabbed the focus adjustment tool which is really just a plastic thingamajig stuck in the control box. It takes on the job of a screwdriver for enabling LCD calibration and the last mentioned is an unavoidable task if you ever plan to get started on watching content. Because we aren’t all built alike, the extra nose bridge mentioned on the box should come in handy for at least one different nose type.

The UI shows up on the screens once you invoke the favors of the power button on the control hub which sports six round buttons. Each of these delivers more than one function. Take the power on/off button which is used to cycle through OSD choices and turn on the OSD for example. There’s a single control for shimmying between 2D or 3D and changing from Straight to Swap Eye modes or vice versa. The remaining buttons function as volume controls as well as controls for navigating through the OSD configurations. 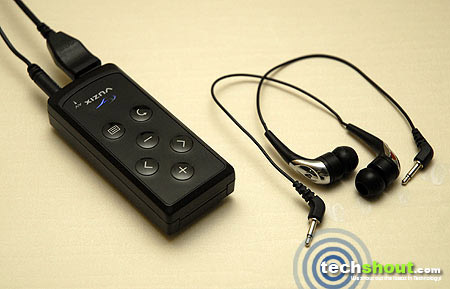 The on-screen interface is fairly easy to comprehend in spite of being quite extensive. There are options for switching between standard 2D as well as Side-by-Side (S X S) 3D, Red/Green 3D anaglyph, Red/Blue 3D anaglyph or Blue/Amber 3D anaglyph formats. For 2D viewing, we had to move the LCD views closer together and the S X S format displays left and right eye images separately. When we spoke about the selectable options being extensive, we actually meant it. You can knock yourself out shifting between several picture settings as also various presets including user programmed presets.

The Vuzix Wrap 920 is a competent pair of video glasses in terms of the image quality played out on the OSD though anything less than HD feels obsolete nowadays. Two hours of video viewing is what we got from a couple of AA batteries at each test run. One thing that will really start bothering you after quarter of an hour is the heat escaping the upper rim and warming up your forehead. We found the audio quality good enough to prevent us from sourcing accompanying audio from our iPod touch and 2D content is pretty immersive by itself. Though people may complain about the rest of the world being visible from around the glasses’ frames, nothing but the videos being reeled out provide any sort of distraction when you lean back and watch content. As for the matter of eye strain, it’s a relative factor that differs from person to person.

The video eyewear may look like a prototype in real life, but its reason for existing is simply marvelous. Like we said before, it’s entertainment that clings to your eyeballs.

Its audio quality stands by the videos being played out pretty stolidly. There’s no need to plug in a pair of headphones to the video source even though it’s offered as an option.

Where do we start on the build quality angle? These glasses are nowhere near as futuristic-looking as Vuzix’s iWear and its various components which have the tendency to shift out of their proper positions need to be knocked back into place regularly.

The picture quality is not very appealing and it certainly does not offer the equivalent of a 67” screen viewed from a distance of 10 feet. Ah well, what else can you expect at 640 x 480p resolutions?

The video eyewear sells for $349.95, a considerable price label for something which doesn’t look very alluring. Hopefully, Vuzix will remedy this in future iterations. Video glasses are here to stay and we can probably expect the company to come out with HD-capable versions soon. The Vuzix Wrap 920 ought to be quite useful on those long plane journeys or anywhere that allows you to lay back and view entertainment and we did get used to it after a while. Plus, they make you look cool. It’s an 8 out of 10 rating for the Vuzix Wrap 920.