Wearable devices are fast becoming lucrative future prospects for manufacturers, and a company named Vuzix has just jumped the bandwagon with its Vuzix M100 Smart Glasses. Described as an ‘Android-based wearable computer,’ this product has become the world’s first commercially available smartglass. Out for developers at the moment, it can be pre-ordered by the general public at $999.99 to receive their devices sometime later this month.

The Vuzix M100 Smart Glasses allow a WQVGA full color display to float in front of your eyesight, and it even lets you adjust its orientation according to your convenience. Four physical control buttons are available on it, whereas its traditional smartphone interface allows you to control it using your paired Android device. 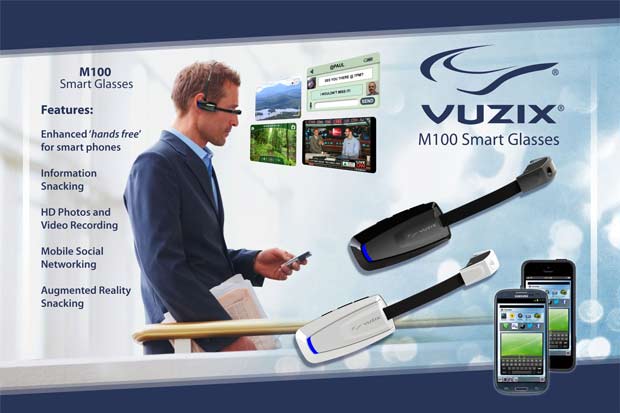 Moreover, the Vuzix M100 Smart Glasses can even be directed to recognize voice commands and gesture controls. The device features a 5MP camera supporting 1080p video recordings which can be stored on its onboard memory. Mono audio output has been granted to the whole setup, whereas input is left up to the two microphones its makers have mounted on it.

An OMAP4430 dual core processor clocked at 1GHz has found its way inside the device, apart from 1GB worth of RAM. 4GB of internal memory is present on the Vuzix M100 Smart Glasses, and it can be expanded further up to 32GB by means of its microSD card slot. Apart from Bluetooth, Wi-Fi and USB connectivity, it kicks in 3-axis sensors for gyro, accelerometer and compass as well.

Like we said, the Vuzix M100 Smart Glasses can be pre-ordered now through the company’s official site at a price of $999.99. White and black color options can be chosen from.