Communicating via voice on WhatsApp is an option right now, but it’s available only in the form of short recorded voice messages. News is that this is all about to change, with users of the app now ready to receive a full-fledged voice calling facility through for their smart devices.

A couple of screenshots have been leaked by a blog named iPhoneItalia, giving us a proof of the existence of such an attribute. These are apparently taken from a current beta version of WhatsApp’s iOS app which seems to be offering a new interface for placing voice calls. 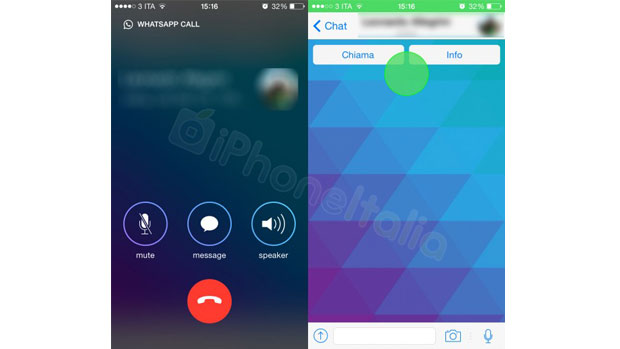 If indeed true, this could put it in direct competition with other popular VoIP services like Skype and Viber. Facebook is the new owner of WhatsApp, and its own Messenger app has its own voice calling functionality, but what latter provides is a large international base of users which is nothing in comparison to the number of people who use the former app.

WhatsApp reportedly has over 465 million active users around the world, and it’s available for all major software platforms. In one of the biggest tech deals in recent times, it was acquired by Facebook recently for the magnanimous sum of $19 billion.

WhatsApp still works as an independent company though, and its developers are now apparently busy testing its new voice calling features. We’re now expecting their release through an update in the coming weeks.