Vodafone’s Smart product lineup which comprises of phones and slates has been presented with an all-new addition, the Smart Tab III which is the successor to last year’s model and the third tablet iteration under the carrier’s own brand. The device is a worthy improvement to its predecessor and even with the upgraded features, the provider has managed to keep the price low.

Vodafone is marketing the device as ‘an ideal first tablet.’ The Smart Tab III falls in the 7-inch segment and it has the same resolution as the previous model, 1024 x 600 pixels. The majority of improvements are made under the hood. Instead of Android Ice Cream Sandwich, the device operates on Android Jelly Bean 4.2 and by the looks of things, you can expect a vanilla experience. 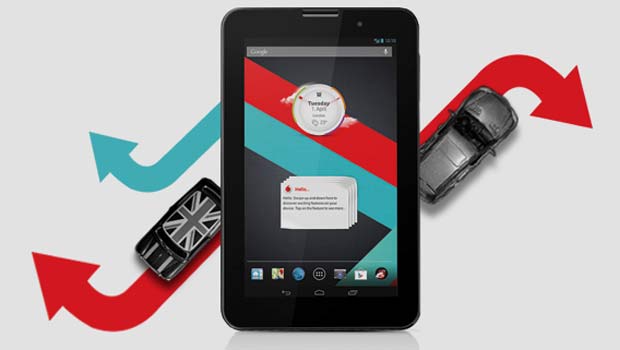 Carrying the load is a quad core 1.2GHz processor. No concrete details have been given about the SOC, but it could be based on the Cortex A7 or Qualcomm’s Snapdragon 200. The tablet also sports an entire gigabyte of RAM for smooth operations and an internal storage capacity of 16GB. Memory expansion is even possible owing to the inclusion of a microSD card slot that supports up to 64GB.

Also fitted within dimensions of 194mm x 120mm x 11mm are a 5MP rear and a VGA front camera. The Smart Tab III comes with cellular support for 2G and 3G networks, but it can only be used for data and not voice calling. Nevertheless, you can still call people via third-party apps. The slate also has Wi-Fi, Bluetooth 2.1 and a 3500mAh battery.

The Vodafone Smart Tab III can be picked up on pay as you go for £250 or on a pay monthly subscription starting at £19 with a 24-month contract.