One of the world’s most well known media players, VLC has finally landed on the Windows Store for the latest version of Microsoft’s operating system in the form of an app. The version available right now is in its beta form, and it supports the same file types as its desktop variant.

The VLC media player is a free and open source software which boasts of support for a large number of file formats in the audio and video department. For funding of its Windows 8 app, its creator, VideoLAN had taken to Kickstarter in 2012, and had just managed to meet its goal of £40,000 on the crowd-funding site. 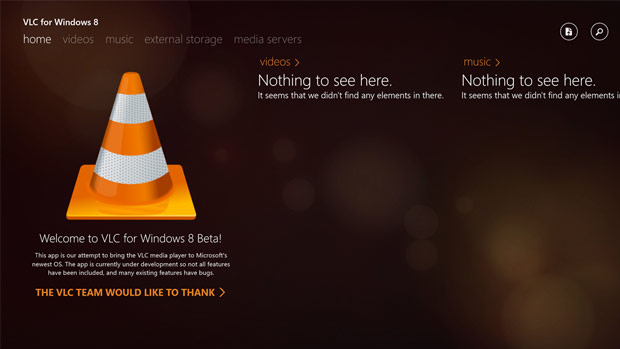 As stated on the Windows Experience blog, the VLC for Windows 8 Beta app will let you easily manage and play your video files as well as your music files. Moreover, it will also provide you with dedicated panels that are aimed at granting a view of all the videos and songs present on your devices.

Although this app is slated to dole out support for the Windows RT platform in the future, its current version only works on PCs, laptops and tablets running Windows 8. It’s still in its beta stages, so the app is expected to have a few bugs here and there, which you can report about on the developers’ support portals.

Like we said, the VLC app for Windows 8 is now live on the Windows Store, and can be downloaded free of cost.