Vivo made a mark for itself back in January when it unveiled the first phone with an under-display fingerprint scanner. It’s hardly been a few months since then and it’s already ready with a phone that promises even more advanced technology. It had said the handset was just a concept last week, but it’s now unveiled the device at an event in China.

Dubbed the Apex, the smartphone has what Vivo calls its Half-Screen In-Display Fingerprint Scanning Technology. Instead of just restricting the fingerprint sensor to a small portion of the screen at the bottom, the feature allows the bottom half of the panel to serve as a fingerprint reader.

This is naturally a bit more convenient since users won’t have to find and then press their fingers against one particular spot. Vivo has also taken pains to gain the title of the world’s highest screen-to-body ratio with an impressive 91%. The bezels at the top measure just 1.8mm, while those at the bottom are 4.3mm only. 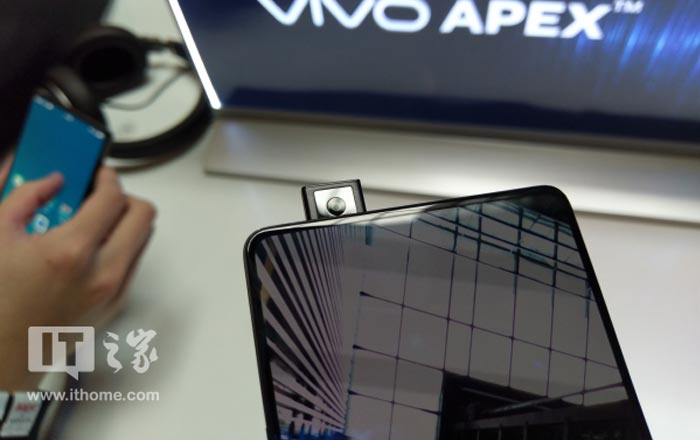 Looking at the photos above, one might wonder where the various sensors and selfie camera have gone. Turns out, Vivo hid both beneath the 5.99-inch OLED display. When required, the 8MP lens pops up like a periscope within 0.8 seconds. It’s not a bad idea, and saves the company from having to turn to a notch design.

The Apex’s screen doesn’t just show visuals. It also utilizes Screen SoundCasting Technology to broadcast Hi-Fi sound, getting rid of the need for a traditional loudspeaker.

Vivo plans to begin mass manufacturing of the Apex by the middle of the year with a Snapdragon 845 processor inside. Price and more detailed specs haven’t been revealed yet, so we’ll have to wait a few months for that.