Chinese smartphone companies are known for their efforts to deliver high-end features in a budget-friendly package, and it looks like Vivo will be taking things to an all-new level with its Xplay 3S that will boast of a QHD 2,560 x 1,440 pixel panel. The device is said to fall in the phablet category, but no specific screen size has been provided.

Current generation smartphones with 1080p screen are already an overkill, but considering that the Xplay 3S will be larger than 5 inches, the benefits of such a high resolution panel should be visible, not entirely though. Vivo, however, isn’t the only one to announce its intentions of a QHD smartphone. 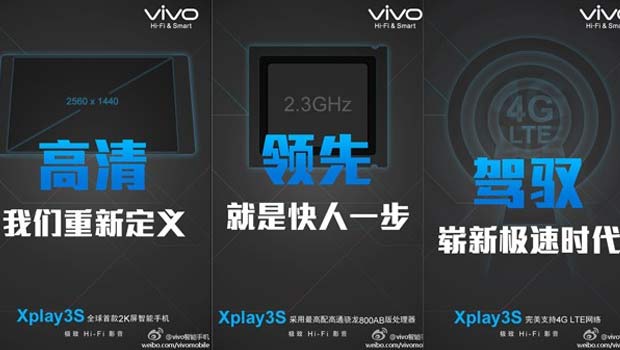 LG has already showed off its AH-IPS LCD panel that delivers visuals in the same 2560 x 1440p resolution in a 5.5-inch form factor. The pixel density for this screen is pegged at 538ppi. According to Engadget, the company has also disclosed a couple of specifications through Sina Weibo. The Xplay 3S will carry a Snapdragon 800 MSM8974AB SOC making it compatible with TD-LTE and FD-LTE networks in China.

Well, that’s all we’ve got on the Xplay 3S QHD smartphone. Vivo is also the brains behind the 6.55mm X1 which ran for the world’s thinnest title last year and this year’s super slim X3 handset which measures just 5.75mm thick. While the company is aiming for the ‘world’s first’ title in the high resolution display race as well, it’s yet to be seen if it will deliver the Xplay 3S before LG comes up with a QHD device of its own.

The final specifications and price are still a mystery and we don’t expect Vivo to make the Xplay 3S available outside China.