The futuristic-looking Vivo X21 smartphone with an in-display fingerprint sensor is the very first of its kind in India. This is the phone we all hoped Apple was going to give us with the iPhone X. Vivo launched the X21 on these shores just a few days ago. And we’ve spent just enough time with the X21 to give you our first impressions of it.

The Vivo X21 (goes by the name Vivo X21 UD outside India) is a beautiful piece of tech. When we imagined the iPhone X or the Galaxy S9, this is what we expected them to look like, minus the notch. There’s no denying that the notch on the X21 which is way smaller than the one on Apple’s 2017 flagship, will remind you of the iOS device. But that’s where the similarity ends hardware-wise.

The body of the X21 is all metal and glass. Its gleaming black panel on the back curves slightly to offer a decent grip. It features the minimalistic Vivo logo and a dual camera setup. Placed below the latter is the flash unit. The front of the phone houses a 6.28-inch Super AMOLED display with a 19:9 aspect ratio and 2280 x 1080p resolution. It offers face unlock in addition to fingerprint unlock.

Going where tech giants have feared to go:

The standout feature of Vivo X21 is its invisible fingerprint sensor of course. Industry watchers thought Samsung would introduce it with the Galaxy S9. Apple fans were sure an iPhone would be the first to have one. But Vivo has bravely ventured forth to beat them all to it with the X21’s in-display biometric sensor. It’s one step closer to building a smartphone which is nothing but touchscreen on the front. 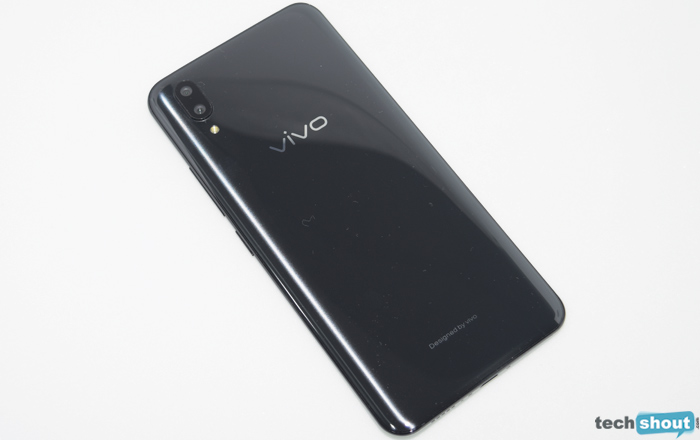 The in-display fingerprint sensor is a grand idea. It is a Synaptics optical sensor which works by peeking at your print between the pixels of the OLED screen. The technology is still too new. So we were not surprised to notice that it needs a bit of polishing. But it’s certainly much, much less frustrating than the iPhone X which fails to recognize our face at least four times a day, forcing us to painfully key in the passcode.

There was some chatter about the X21’s fingerprint sensor not working sometimes. But that’s not been our experience with it. You simply have to give the in-display mechanism a good second to scan your print. You have to understand that the tech has a wee bit of time to go before it’s as fast as those dedicated biometric sensors we find on mid-range to high-end smartphones these days.

The fact that you have to look at the screen to find out where to place your digit does not take away from the thrill of having such a cool feature on your phone. Even unlocking a device with your face requires you to glance at the screen. On a side note, Vivo may be addressing this issue in the Apex which will let you unlock it by placing a finger anywhere on the lower display area.

The X21 has 6GB of RAM and 128GB memory that is further expandable to 256GB. It is powered by Vivo’s Android Oreo-based Funtouch OS and an octa-core Snapdragon 660 processor. We haven’t faced any lags in routine tasks like watching videos, surfing the web, emailing and so on. There was barely any stutter while playing resource-bleeding games such as Asphalt Xtreme and DC Legends.

The 12MP selfie camera on the Vivo phone is aggressive with its face beautification software even when set at minimum. But that’s something the social media savvy generation may not mind. The 12MP primary and 5MP secondary cameras on the back are excellent at their job. Their performance is especially appreciable in low light settings where pictures turn out surprisingly well.

Overall, the X21’s best aspects are its rear camera setup, lag-free performance and exciting in-display fingerprint sensor. It is available online through Vivo India’s official website as well as via Flipkart. The smartphone is priced at Rs 35,990. Buyers also get an additional Rs 2,000 discount with the normal exchange amount when they trade in an old smartphone.