The Vivo V9 has arrived in India as the latest Android smartphone to adopt the notch style made famous by the iPhone X. Unlike Apple’s pricey flagship though, the handset is much more affordable at Rs 22990. We recently got our hands on the phone and took it for a brief spin to give you our first impressions.

Specifications of the Vivo V9:

Right off the bat, the V9’s design and cameras stand out. Its 6.3-inch 19:9 FullView Display 2.0 and 90% screen-to-body ratio allow it to fit inside the body of a 5.5-inch phone, making it fairly compact. You won’t be able to reach the top of the screen with one hand, but that hand won’t be strained since the phone is fairly lightweight at 150g. 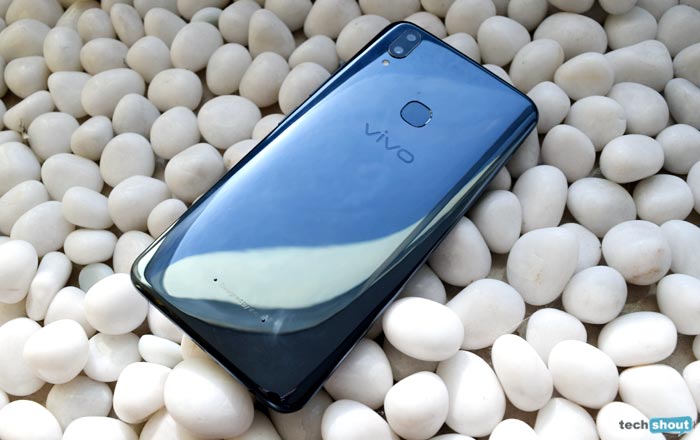 Vivo has always been known as a selfie-centric brand, making beautification software one of its main focuses. The 24MP selfie snapper in the V9 has gotten infused with AI smarts to help in the beautification process this time round, crunching in details like your skin, gender, texture, age, and lighting for clear photos.

We tried out the V9’s selfie camera in a couple of different lighting environments and were pretty satisfied with the results. There’s a standard Face Beauty mode and a separate AI Face Beauty mode which lets you choose the level of beautification from 0 to 6.

Both options smoothed out lines and blemishes for better-looking skin. You can also shoot in Portrait bokeh to blur out the background and put the focus on the subject. This worked for the most part, but we noticed strands of hair getting blurred out as well.

Portrait bokeh is also of the top highlights of the 16MP main and 5MP secondary lens at the back. It’s supported by an AI Bokeh algorithm which relies on machine learning to shoot bokeh images which rival DSLR cameras.

We snapped a few pictures to suss out this claim. The V9 was consistently able to separate the background and foreground, but we couldn’t really see any difference between what other dual-camera handsets can achieve and the Vivo smartphone in terms of blur.

Vivo has also snuck in some other cool features like an Ultra HD mode to shoot in a 4608 x 3456p resolution and AI HDR for better exposed photos. Images generally came out clear and crisp, with a good amount of detailing in well-lit and dark environments.

We’ll be spending some more time with the Vivo V9 to give you a more in-depth look at what the handset is like on a day-to-day basis. It’ll be going on sale starting from April 2 via Flipkart and Amazon India at Rs 22990.