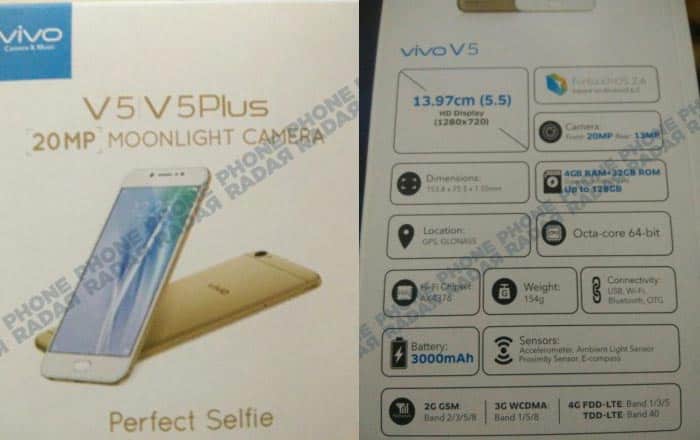 Vivo’s new V5 and V5 Plus smartphones are all set to come out on November 15 in India. Both have been popping up in a number of reports in the weeks leading up to its launch and now a fresh leak provides an in-depth look at the possible specs the two could carry.

The V5 and V5 Plus are successors to Vivo’s V3 series of smartphones which came out earlier this year. This time round, the brand is apparently equipping the two with an unusually high-resolution 20MP selfie shooter dubbed a Moonlight Camera. The term probably refers to some kind of flash feature which helps take enhanced photos in the dark.

The images which have gotten leaked suggest the Vivo V5 will carry a 13MP snapper on its rear surface. If accurate, the phone will be joining the likes of selfie-centric phones like Oppo’s F1 lineup which feature superior lenses on the front rather than the back.

Other notable rumored specs of the Vivo offering include a 5.5-inch HD screen and AK4376 Hi-Fi audio chipset. There appears to be an octa-core 1.8GHz Snapdragon 652 processor running the show here, supported by an ample 4GB of RAM and 3000mAh battery. In terms of memory, users may be getting 32GB of ROMM which can be expanded up to 128GB.

The V5 might be priced at around Rs 20000 when it comes out on November 15. Information about the V5 Plus is scarce right now, with the only other expected feature being the presence of Android 6.0 Marshmallow underneath a layer of the brand’s Funtouch OS.