The throne of the world’s thinnest phone went to the Oppo R5 (4.85mm) recently, but the Vivo X5 Max in on its tail now, ready to grab that title thanks to its 4.75mm thin body. The teaser campaign for this smartphone has already begun, which is an indication that the official launch isn’t far away now.

Through its Weibo account, the Chinese manufacturer is currently releasing images that bear the name Vivo X5 Max, and underline the thin aspect of the handset. It is being said right now that the announcement of the phone will take place as early as this December. 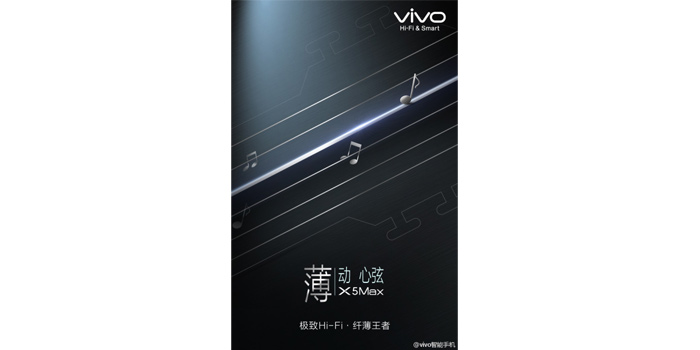 The Gionee S5.5 started the whole ‘world’s thinnest smartphone’ trend earlier this year with its 5.5mm thin form factor. It broke its own record later, when it showcased the Gionee S5.1 which, as its name implies, has a 5.1mm slim body. But a few days ago, Oppo surprised us with the R5 which has a ridiculous thickness of just 4.85mm.

And with the X5 Max now all geared up to join the league, the competition has surely gotten hotter. We had learned about its specs through a leak recently, and had found out that the smartphone comes with a 5.5-inch 1080p full HD display and a 1.7GHz octa core processor onboard.

Here’s a detailed look at the leaked specs of the Vivo X5 Max:

Along with the Vivo X5 Max, the company will most probably be launching its new flagship as well, the specs of which had also leaked out recently.