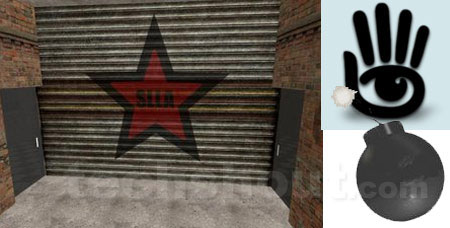 These days so many companies are entering the virtual world of Second Life as a newer and more efficient means of advertising. However, now, people who are controlling animated avatars of a self-proclaimed Second Life Liberation Army (SLLA) have set off computer-code versions of atomic bombs at virtual world stores over the past six months.

Avatars on Second Life are the animated figures that are resident’s proxies in the virtual world of Second Life created by Linden Systems.

The SLLA also have their very own manifesto, and claims to be an “in-world military wing of a national liberation movement” devoted to replacing the rule of Second Life creator Linden Labs with a democracy representing the nearly four million residents.

The virtual bomb blasts in Second Life explode into white hazy balls, that blot out portions of a screen and also batter avatars that are situated nearby. The disruptions caused are brief in nature and do not really cause lasting damage in the virtual world of Second Life.

Here is what SLLA said in a message on its website which is located at http://secondlla.googlepages.com, “As Linden Labs is functioning as an authoritarian government the only appropriate response is to fight. When the SLLA succeeds in its aims it will disband and hand power back to the political wing of the movement.”

According to San Francisco-based Linden Labs, creative dissent is welcomed in Second Life, as long as it doesn’t interfere with the ability of other residents to enjoy the virtual world.

Second Life has also stopped charging a tax on items created by residents soon after avatars that were created in the images of American revolutionaries recreated the Boston Tea Party in the virtual world around three years ago.

Ever since then, website users who were skilled at manipulating computer codes have engineered nothing but misbehavior that included a “push gun” that blasted other avatars back when fired.

According to Linden marketing director Catherine Smith said, “We do the utmost to ensure the protection of creative expression, within certain bounds. Ultimately, instances in which residents engage in simulated violence will have to be taken on a case-by-case basis.”

Basically residents of Second Life are given free rein, as long as they don’t harass or interfere with other avatars by engaging in “griefing”, an action that refers to the act of harassing others in-world.

Linden Systems has viewed the SLLA bombings as “mock terrorism” that has been done in fun to trigger off a debate about the in-world power structure. Catharine Smith says, “We believe recent events involving SLLA protest lack malicious intent. Resident reactions to such attacks have been decidedly tongue-in-cheek.”

Besides, the SLLA web site has also demanded that Linden Systems give the residents of Second Life residents “basic rights” by going public and allowing each avatar to buy a share of stock at a set price.

Smith has also said on behalf of Linden Systems that it will hand out temporary banishment or other penalties along the same lines as outlined in the Second Life’s written terms of service, if and only if residents are in a position where they are being constantly harassed by the SLLA.