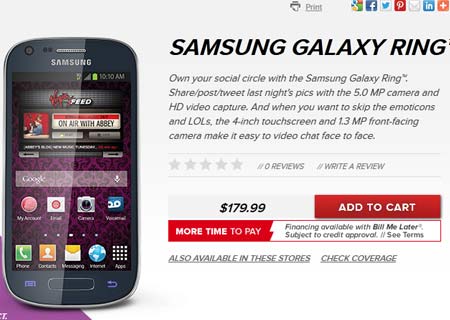 The Samsung Galaxy Ring is the latest offering from Virgin Mobile in the US and this piece of hardware comes with an affordable retail tag backed by a quad core processor and Android Jelly Bean. It’s good to see Samsung launch a device that’s not tied to its latest flagship and we expect the arrival of many more tomorrow at the Premier event in London.

The Samsung Galaxy Ring looks a lot like the Exhibit from T-Mobile which is essentially the Galaxy S3 mini. However, this smartphone comes with different specifications, some better and others acceptable. Instead of 4G LTE, the carrier is offering the handset with 3G cellular support. The front dons a 4-inch touchscreen of unknown resolution and a 1.3MP camera for video calling. 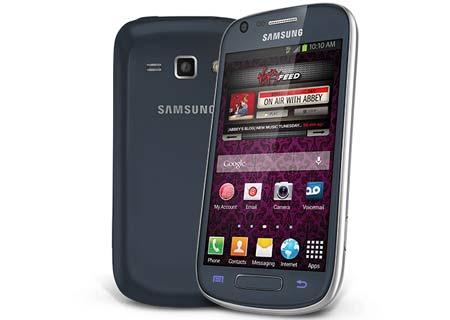 There’s a quad core processor, a Snapdragon AP according to Android Community, powering up the Samsung Galaxy Ring. The CPU is either based on the Cortex A7 or A5 architectures, carrying a clock speed of 1.4GHz. Memory needs are in the hands of 1GB RAM and 4GB ROM with up to 64GB memory expansion through the microSD card slot. On the rear, buyers will find a 5MP AF camera with LED flash, that can record videos in 720p HD.

Getting these components up and running is a 1750mAh battery which is estimated to deliver up to 8 hours of talktime or around 7 days of standby. With Jelly Bean running the show on the Samsung Galaxy Ring, users will have access to a host of entertainment features. The carrier hasn’t missed the chance to include its own applications and services such as Mobile Feed for music streaming, Voice Actions and ID Packs amongst others. 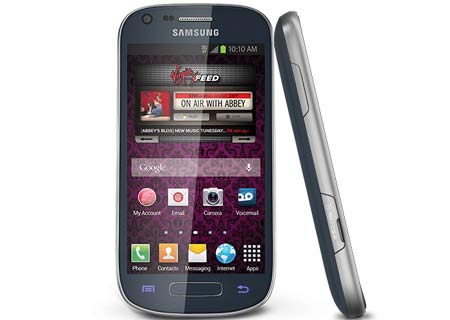 The Galaxy Ring is currently available through the carrier’s online store for $179.99 on a pre-paid subscription. Additionally, potential buyers can pick up the handset through retailers such as Best Buy, Walmart, Radio Shack, Target and Kmart.