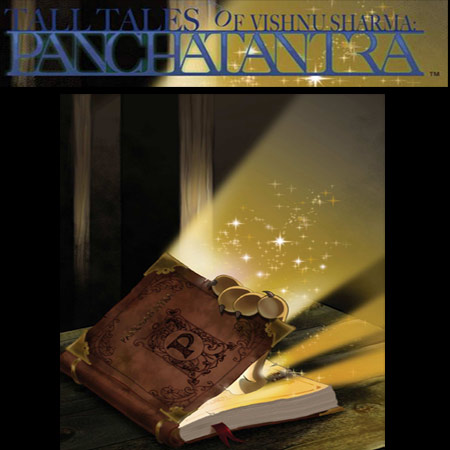 Virgin Comics, known for its colorful and wildly exaggerated renditions of Indian mythological comics has come out with yet another comic book series called Panchatantra: The Tall Tales of Vishnu Sharma that has been inspired by India’s very own Panchatantra fables.

Nowadays, young children are exposed to newer forms of entertainment such as video games. Gone are the days when childhood meant playing in the outdoors, reading adventurous books and other such activities that kids used to be engrossed in once upon a time! Virgin Comics’ latest series takes a look at just that, but with an added sense of flavour, just enough to stimulate your intellectual senses.

Virgin Comics is known for take age-old myths and transforming them into something that everybody can relate to. ‘Panchatantra: The Tall Tales of Vishnu Sharma’ too reflects just this. Read on to find out what the comic is all about.

A notorious multinational conglomerate is purposely trying to silence the mythologies, fabels and folklore of yesterday. Thus, in an attempt to prevent this from happening, characters from the Panchatantra fables emerge into modern Indian to hire the living descendent f the man who originally created them, Vishnu Sharma, a teenager from Mumbai.

However, the Panchatantra characters including the Lion, Bull, Monkey and Kackal are not too pleased with the current situation. Firstly, young Vishnu is totally engrossed in his iPod, cell phone and video games. Secondly, the ancient story world is at war with the modern fables of “boy wizards” and “anime monsters” that are the reason why age-old myths are being exterminated.

It is up to young Vishnu, to make the old and valuable fables relevant to the modern world again. And, will the Panchatantra characters be successful enough to convince Vishnu to take on this mission.

Sharad Devarajan, CEO & Co-Founder of Virgin Comics said, “With Panchatantra The Tall Tales of Vishnu Sharma, we continue our mission of looking to India as a source of innovative creativity with a vault of stories that should be brought to the world.”

Interestingly, the game is being written by leading Indian fantasy and comic book writer Samit Basu, who has come to be known for other comics such as Virgin Comics’ Devi and The Gameworld Trilogy. The comic is being illustrated by rising comic book star Ashish Padlekar.

The Panchatantra: The Tall Tales of Vishnu Sharma has been launched across North America and each one is priced at $2.99. However, you can also purchase the comics online beginning next week from www.virgincomics.com.