Vine for Android has grabbed hold of an update which infuses the much popular video-sharing application with the ability to share on Facebook, apply hastags and more. Announced via a Tweet yesterday, the update is live now on the Google Play store. Just a day before that, Vine had received a prominent competitor in the form of Video on Instagram which is also live now with its unique features.

Vine for Android was first released earlier this month, after a fairly successful iOS stint. Traits like Facebook sharing and hashtags from the new update were already available on the iOS version though. Apart from those, the developers of the app have also announced that improvements to its capture speed, quality and audio/video synchronization have also been delivered through the new version dubbed, 1.1.0.

For memory conscious users, the fresh edition of Vine for Android even brings forth the option of clearing cache files. It can be accessed by entering the Applications Manager section in Settings. And its makers have also granted it other bug fixes and UI improvements.

The popularity of Vine for Android and iOS is now being challenged by Video on Instagram, a feature which was granted to the 100 million users-strong social networking service recently. It lets a person record, add trademark filters to and share videos of up to 15 seconds in length. Its iOS version also kicks in a cinema stabilization feature which basically eliminates wobbles from recorded clips. 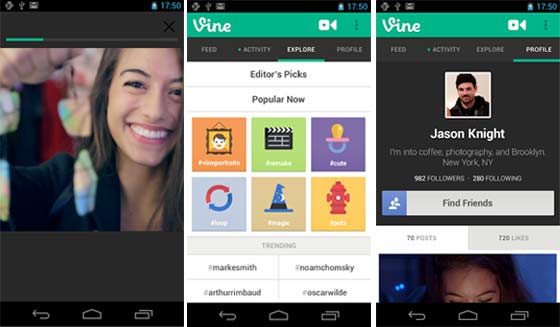 The app in question however, has its own unique aspects. For instance, only 6 second videos are permitted by it, without any lower limit. And since it’s owned by Twitter, it possesses seamless integration with the micro-blogging website. For Android as well as iOS, the service is available free of cost. It can be downloaded on respective devices through the App Store and the Google Play store.