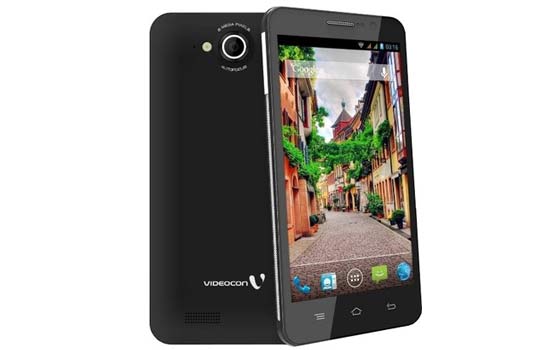 The Videocon A55HD is the new quad core kid in town, all geared up to take on the budget segment in India with mid-range specifications and Android Jelly Bean. For the price Videocon is currently asking for the smartphone in question, buyers would get a good deal of features.

Well, hardware-wise, the Videocon A55HD is a lot like most other affordable handsets that have breached the market. With clearly predictable and common components on the inside, the phone would have to be more dependent on its design if it wants to reign supreme amongst the tough competition it will face like the Lava Iris 458q, the Lemon A4 and the Micromax Canvas HD.

The Videocon A55HD brings the latest there is in the Android ecosystem, Jelly Bean 4.2. By the looks of things, we suspect that the handset will be loaded with a vanilla version of Google’s mobile OS as no mention has been made with regards to an exclusive launcher or software. Well, the device does tag along gesture controls including flip to silent, and face detection. 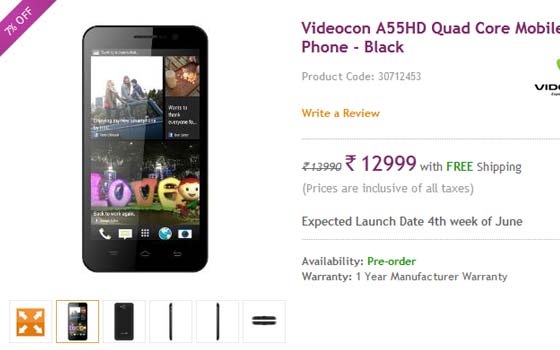 Keeping with tradition, the company has dressed the phone with dual SIM slots. And where connectivity is concerned, users will be treated to HSPA, A-GPS, Wi-Fi 802.11 b/g/n and Bluetooth 4.0 amongst others. The Videocon A55HD is fueled by a quad core 1.2GHz processor which we’re suspecting is based on the Cortex A7 core that’s been the go-to chip for budget smartphones over the past months.

Apart from these, the device tags along a 5-inch 720p display with OGS technology, 1GB of RAM, 4GB flash storage, a microSD card slot with up to 32GB support, a 3.2MP front camera and an 8MP rear snapper. Lastly, a 2,000mAh battery gets it up and running.

The A55HD has been announced priced at Rs 13,499. Currently, only HomeShop 18 has started offering the smartphone for pre-order at a lesser retail price of Rs 12,999, while Flipkart has only listed the handset on its website.