If there was ever a better video that could make just about anyone miserable about having spent the majority of their lives on their couch or at their PC, we can’t remember it. GoPro has launched the all new Hero 3+ camera for outdoorsy folks along with the said video. It’s an excellent visual treat, powerful enough to force at least some of us out of our seats at the first opportune moment.

GoPro has been chipping away at the size of its new camera so that it’s smaller than the previous generation by almost 20%. The battery life has also been extended by 30%. Meaning the Black Edition can take users through almost 2 hours of continuous shooting at 1080p 30fps and with Wi-Fi turned off. It’s 3 hours of the same on the Silver Edition.

Stills can be clicked in 5MP, 7MP or 12MP resolution and are backed by various modes such as burst, continuous, time lapse and simultaneous video plus image capture. The camera is waterproof at depths of up to 40 meters and it can shoot videos in resolutions as high as 4K. For those wide angle shots you’ve always wanted, the company has added a SuperView mode which delivers the same in 1920 x 1080p or 1280 x 720p. 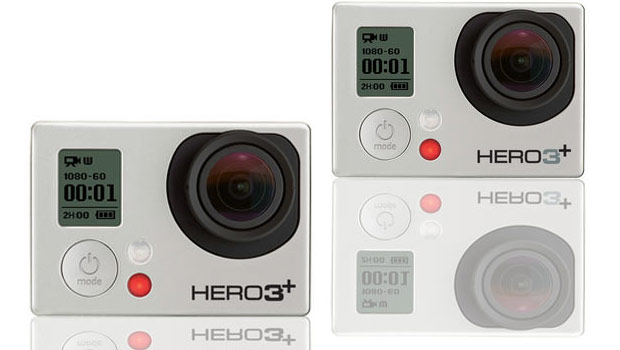 Just like the Black version, this one also features an f/2.8 aperture and a 6-element aspherical glass lens. It can shoot still photos in 5MP, 7MP or 10MP and does time lapse and burst modes. The camera can deal with water up till depths of 40 meters. It delivers fewer video shooting choices as compared to its sibling. These cover WVG, 720p, 960p and 1080p modes.

The Hero 3+ Silver Edition costs $300, while the Black Edition is pegged at $400. They support up to 64GB memory via microSD and there are miniUSB as well as microHDMI ports too.