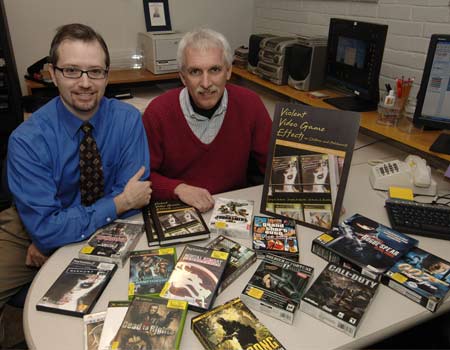 Can video games teach us to be helpful? Well if a new research by a group of psychologists at the Iowa State University is to be believed then video games may have the ability to inculcate a positive behavior in players.

An earlier study by the same group of researchers had revealed that violent video games were quite capable of teaching children aggressiveness. However the researchers now suggest that certain video games may in fact just do the opposite. Certain non-violent videogames, boffins claim could reinforce co-operative and helpful behavior in children.

“This set of studies demonstrates why it is so critical that parents pay attention to the types of games that children play,” explained lead researcher Douglas Gentile, an assistant professor of psychology at Iowa State and director of research for the Minneapolis-based National Institute on Media and the Family . “Games can have many benefits, but parents need to help choose the games that are most likely to get maximum benefits.”

As part of the ‘prosocial’ video game study, researchers analyzed the behavior of youth belonging to multiple age-brackets. These participants across three countries were then allowed to indulge in prosocial games. These are positive games that comprise of characters or protagonists helping others. Analysis revealed that players who enjoyed such games also exhibited more positive behavior and were more prosocial in nature.

For the study, researchers surveyed around 727 middle-school students from Singapore, 780 fifth-grade and 1050 eighth-grade and eleventh-grade students from Japan and finally 161 American college students. Precisely the study brings to light the fact that students in Singapore displayed more co-operation and empathy while students in Japan developed prosocial behavior over a period of 3-4 months.

As for students in America, those who played prosocial games like Chibi Robo and Super Mario Sunshine showed more positive behavior as against those who participated in neutral or violent video games. Besides, those who engaged in violent games exhibited more harmful behaviors towards fellow students.

The results of the study appear in a paper titled, ‘The Effects of Prosocial Video Games on Prosocial Behaviors: International Evidence From Correlational, Longitudinal, and Experimental Studies’. Already published online, the paper will be published in a future issue of the journal Personality and Social Psychology Bulletin.