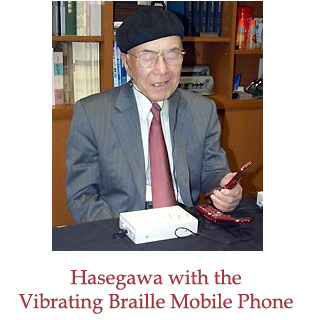 Several technologies, from internet-enabled phones, to touchscreen and dual screen handsets, it’s all been evolved in the present technology enhanced world. Though these developments are applaudable, what happens to the physically handicapped individuals who attimes find it difficult to operate the simplest of functions in a phone or maybe are unable to use it at all? Here’s some hope!

A 73-year old former teacher at a school for the visually challenged along with a professor from Tsukuba University of Technology have together developed a new mobile phone that sends out vibrations representing Braille symbols, making it possible for people with sight and hearing difficulties to communicate.

The former teacher named Sadao Hasegawa along with Tsukuba University of Technology professor Nobuyuki Sasaki and other developers have built this handset which is apparently the first of its kind in the world.

So what exactly happens in this new device?

When a caller pushes numbers on the keypad corresponding to Braille symbols, two terminals connected to the receiver’s phone vibrate at a specific rate to create a message.

In Japanese Braille six dots represent the Japanese syllabary. The numbers 1, 2, 4, 5, 7 and 8, will be used on the mobile phones to represent these six dots, making it possible to generate Braille symbols. Currently, the developers are working to make the devices that convert keypad information into vibrations smaller than their existing size (16 centimeters by 10 centimeters). If vibration-based Braille is used on a broader front, it may allow information to be “broadcast” to a number of visually impaired people at one go.