Viber is celebrating its third birthday and on the occasion, the instant messaging service has rolled out version 4.1 of its application for Android and iPhone. But that’s not all, the developers have also revealed that its calling service called Viber Out has been launched globally and it now allows users to make calls to devices even if they do not have internet access.

Currently, the service is only available on the latest versions of Viber applications meant for Android and iOS gadgets as well as its desktop app. And it has been announced that it will come to Windows Phone-based handsets very soon. The developers behind this messaging utility claim that it lets you make calls to mobile phones and landline numbers for prices less than what Skype charges. 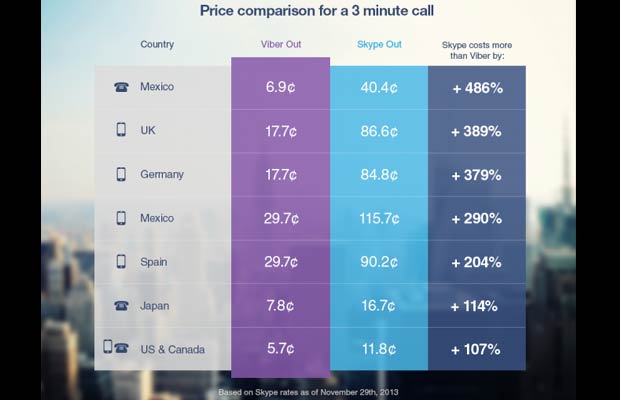 Viber’s per-call price is lower than that of its competitors, because its per-minute call rates are considerably less and the former even forgoes connection fees. Your phone number is displayed on the mobile phone or landline where you are calling and it eliminates the need to dial a number even when using the desktop app as it has your phone’s address book.

And if that’s not enough, Viber Out has joined the proprietary Sticker Market and the company has announced the launch of some new stickers. This service was initially launched in Philippines after it was struck by Typhoon Haiyan. Back then, Viber had partnered with telecom operators like Mada Communication, Bharti Airtel, Omantel, Telecom Austria, Telecom New Zealand, Netvision Cellcom, Hutchison, Telecom Italia, Citic and Globe Telecom to offer free calls to and from the country.

Viber Out has already been made available for Android devices, iOS gadgets as well as desktops.